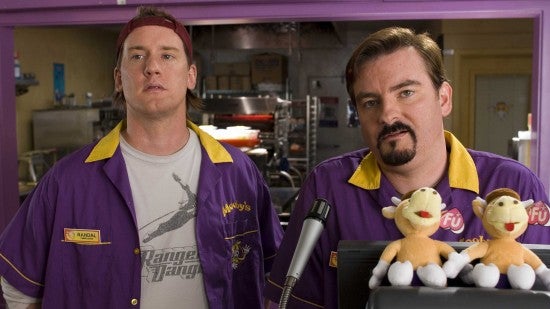 So now that TUSK is nearly done (we still have our Guy Lapointe scenes to shoot this month), the idea was to gear up for CLERKS III. But then I started thinking "Isn't that stepping backwards? Like literally?" While I love it with all of my heart, CLERKS is my past. It's how I got started. And I'm just getting started again, after taking 3 years off, certain I was done making movies. TUSK represents something bold and new. No matter how bold I make it, CLERKS III will always have a number in the title. It will never be new. It will rock, I assure you, and it will be a worthy final installment in my mini-mart magnum opus. But it's predicated on something I did a long time ago. I wanna keep moving forward. SModcast Pictures is becoming exactly that: we're starting to make movies based on podcasts. TUSK was the first, and now COMES THE KRAMPUS will be next: https://silentbobspeaks.com/?p=1075 Now, at this point in time, nobody but me can make a CLERKS film. But ANYONE can make a Krampus picture. So before anyone else does, I figured it's time to keep moving forward: we're gonna shoot COMES THE KRAMPUS in April, before CLERKS III.

So it looks like fans dying to see Kevin Smith complete the Clerks trilogy will just have to wait a little longer.