For the first time since 2008, a movie written and directed by Kevin Smith is getting traditional theatrical distribution via a studio after A24 and Demarest Films teamed to acquired the rights to Tusk. The film, which stars Justin Long and Haley Joel Osment, was born out of one of Smith's SModcasts. It will be released in the third quarter of 2014, says Deadline. Kevin Smith's last two feature films, Red State and Jay and Silent Bob's Super Groovy Cartoon Movie, have both toured the country in a weird release pattern where fans could only see the movies if they bought tickets to a Q&A with Smith and other members of the cast and crew afterwards. His most recent wide theatrical release was 2010's Cop Out, which he merely directed as a work-for-hire gig at Warner Bros. and did not write. The last time a movie he wrote and directed was in theaters, it was Zack and Miri Make a Porno in 2008. 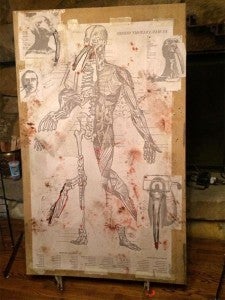 It's  been a rough decade or so for Smith theatrically; following the huge success of 1999's Dogma and then the failure of his animated series Clerks on ABC, the filmmaker decided to wrap his series of interconnected "View Askewniverse" films with Jay & Silent Bob Strike Back, which would finally give Smith's recurring background characters a starring role of their own. It was met with critical ambivalence and while Smith's fans liked it considerably better than mainstream audiences did, they were sorry to see Smith's universe go. By the time the film was pulled early from theaters after September 11 (it was released on August 24, but after 9/11, nobody at the distributor thought Will Ferrell's frequent references to the stoner duo as "terrorists" would fly), it was already pretty evident that nobody was completely happy with the film. Jersey Girl came next and took a commercial and critical drubbing after being lumped in with Gigli, which also starred Ben Affleck and Jennifer Lopez and came out around the same time. Since then, only 2006's Clerks II (a return to the View Askewniverse, and even then not his last as Clerks III is promised) has enjoyed the kind of critical and commercial success Smith was accustomed to in the '90s. One or both components have been missing from each movie he's done since. Despite their low critical reputations, though, everything he's done since Jersey Girl has made its money back at the domestic box office; he works inexpensively and has a dedicated fan base that will guarantee $20 million to just about anything he opens in wide release. That's attractive to studios and he's rarely had trouble finding a little bit of money for a smaller project. Also, during that time he's also produced a number of small projects, directed some TV episodes always to solid reviews and had his own TV success with Comic Book Men and Spoilers. Recently, he's repeatedly voiced his desire to retire from feature filmmaking, but not before writing and directing at least Tusk and Clerks III. Originally, he was set to make a feature film called Hit Somebody, which he identified as a hockey drama, but the project spiraled out of manageable size and will now be a cable TV miniseries instead.