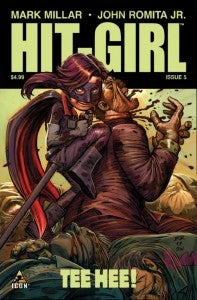 According to leading lady Chloe Grace Moretz, Kick-Ass 2 had to be rewritten by screenwriting duo Chad Gomez Creasey and Dara Resnik Creasey (Pushing Daisies), who were asked to "create a more female side" of Hit-Girl, something that the filmmakers felt needed to be done because in the time between films, Grace-Moretz had aged to the point where the badass tomboy routine didn't work as well as it did when she was 11. Obviously, this is a bit of a change from the comics, where the character didn't age much between the first two volumes and has never been depicted as particularly close to reaching sexual maturity. "On the first draft with my character it was very male centered so what we had to do--we brought in The Creaseys, who was another writing team, to collaborate with Jeff and create more of a female side of the character in relation to the maternal aspect," Moretz, who has described the film as "anti-comic book," said during a recent junket interview, embedded below. "Because you kind of have to have that female driven character, you can't have the crass eleven year old be fifteen or sixteen, it's not so cute anymore."