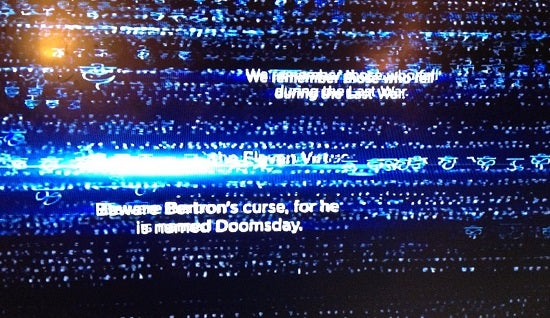 Unquestionably the highlight of the Man of Steel Blu-ray collection is a documentary that gathers concept art, viral marketing assets and a ton of new material about Krypton and fashions them together as a documentary film. It's this documentary that's the basis for the Learn About Krypton viral site that's just emerged, and one of the things that the film does is translate some of the Kryptonian language that the production team put together for Man of Steel. In the context of the documentary, the U.S. government was able to reverse-engineer a translation of a massive cache of Kryptonian data found in the databanks of the Black Zero, made accessible when the Zero communicated with Kara Zor-El's scout ship (the Fortress of Solitude-like craft that Clark found in the movie). So...what did it have to say for itself? 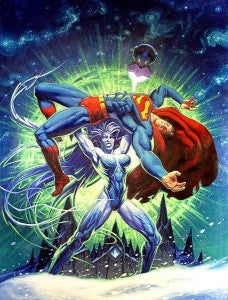 "We give thanks to the great god Rao and celebrate his victory over Cythonna." What's that all about? Well, Krypton's red sun is called Rao but, in many versions of the Superman mythology, so is their god. A sun god, he ascended to power by overcoming an ice goddess named Cythonna, who would later return to attack Superman. Created by Walter Simonson, Greg and Tim Hildebrandt, Cythonna only appeared once--in the graphic novel Superman: The Last God of Krypton--but she could be an interesting villain for a future film, certainly. Seeing Superman go toe-to-toe with Faora in this film certainly gave us the idea that if a female character is powerful enough, the audience won't have a problem with Superman hitting her. "We remember those who fell during the Last War" In the pre-Crisis on Infinite Earths continuity, an ancestor of Superman's named Pir-El was a key military hero in "The Last War," which pitted the Kandor-Kryptonopolis Federation against the Urrika Confederacy. Urrika launched a deadly attack on Kryptonopolis, razing the city, and the Kandorians, led by Pir-El, had to retaliate. Ultimately, they used an experimental, chemical warfare to defeat the enemy, whose weapons were solar-powered and subject to a cloud that temporarily blotted out Rao (the sun, not the god). 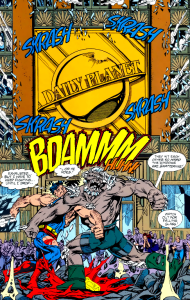 "Beware Bertron's curse, for he is named Doomsday." Bertron was a Kryptonian scientist who lived hundreds of years ago. Fixated on creating the "perfect" life form, he evolved something he thought could bear the ravages of the planet's most unforgiving landscape, and then set the cloned infant free there to be devoured by the elements and local animal life. Scraping up the leftover genetic material, Bertron did this hundreds of times, essentially forcing the clone to rapidly evolve. Ultimately, the being that was created was virtually indestructible and had evolved the ability to resurrect itself after death, having "evolved" past whatever killed it so that it couldn't die the same way twice. Bertron had succeeded in making an immortal and powerful being--but that being was barbaric and impossible to control--and it carried with it the genetic memory of generations of abuse, driving it to destroy Bertron and basically anything else that crossed its path. Eventually subdued and bound, the being known as Doomsday was fired off into space--where its cell crash-landed in what would later become Ohio and was buried deep underground, where Doomsday "hibernated" for decades or centuries before he woke up and tore through the East Coast of the United States, stopped only when Superman sacrificed his life to destroy the beast. That's it for the story-specific phrases that turn up on the disc. In addition, there were some sample sentences put together "by S.T.A.R. Labs" for the documentary, all taken from Kryptonian religious texts. These all reference Kryptonian historical or mythological figures, or deities, but don't seem to focus on any one story from the comics. Those sentences were: "The wisdom of Telle guides us." "The beauty of Lorra inspires us." "The four Moons of Yuda protect us." "The Light of Rao warms us." According to the DC Comics Wiki, "In current continuity, the Religious Guild reverences Rao (god of fire and the Sun), Telle (god of wisdom and the Science Guild, gender unspecified), Lorra (god of beauty and the Artists Guild, gender unspecified), Mordo (god of strength and the Military Guild, gender unspecified), Yuda (god of the Moon and the Labor Guild, gender unspecified), and Cythonna (goddess of ice and the Religious Guild itself)." Not quite a Kryptonian cypher, but there's also a story--by Lois Lane, of course, from the Daily Planet that details some of the events of the film.  Here's a partial transcription, based on what we can see onscreen: SUPERMAN! Mysterious Hero Saves the World In an epic showdown over the skies of Metropolis, the caped wonder we now call Superman along with teh United States Air Force, defeated alien terrorists attempting to destroy the city and ultimately, the world. Days ago General Zod and his Kryptonian army invaded global airspace and declared that the citizens of Earth were harboring a fugitive from a planet called Krypton. As government agencies scrambled to respond, clues about an alien living among us had already been discovered deep beneath a glacier in the Artic [sic] Region. Embedded with military and scientific teams of [unclear], I witnessed their detection of a mass concealed in the ice. It was first believed that what they had found was a Soviet era submarine, however, what they discovered was something much more exotic. An isotope analysis of the surrounding ice bores suggested that the object had been trapped in the glacier for over 18,000 years. The Pentagon was quick to deny any such encounter, but when the ship broke through its icy bonds and disappeared into the clouds, I arrived at the inescapable conclusion that the object did not originate on earth. Teams from across the world tried to track the ship, but were unable to locate its whereabouts... 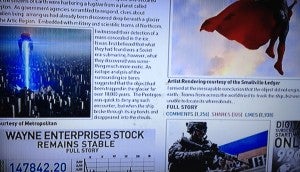 Of course, that ship, which arrived on Earth 18,000 years ago, was piloted by Kara Zor-El--something not revealed in the movie but in a prequel comic of which Superman's distant relative--known to comic book readers as Supergirl--was the lead character. What happened to her, or to Dev-Em, the homicidal stowaway who caused the craft to go down, isn't clear. The last thing worth mentioning on that Daily Planet website is that there's a stock ticker in place down in the bottom left corner, declaring that "Wayne Enterprises Stock Remains Stable." While that seems at face value like a fairly generic statement, here's a thing to consider: In Christopher Nolan's Dark Knight Trilogy, Wayne Enterprises always seemed to be in a state of chaos. Bruce Wayne, young and brash, was spending far too little time focused on his company and it suffered, to varying degrees throughout the three films. By the end, Wayne had been bilked out of his money and his company was in complete shambles in The Dark Knight Rises. Here, it seems, we're looking at a Batman who's not only a little older and more world-weary, but who's figured out how to make some semblance of peace with his secret identity. So there's that...! More on the Batman connection tomorrow, surely, as Zack Snyder and Kevin Smith team up for a social media fan event with Henry Cavill and Amy Adams.