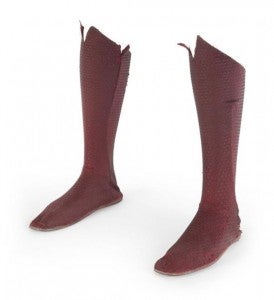 How much would someone pay to be in Henry Cavill's boots? Well, the answer appears to be at least over a grand. Julien's Live is auctioning off a pair of Superman boots from the Man Of Steel movie. The Man of Steel boots are production boots that are described as "Deep red Spandex boots with a distinctive urethane chainmail overlay as seen on the entire costume. The boot material is glued to a textured, hard rubber sole. The urethane trim from the top of the boots has been removed and there are signs of production wear on the toes and heels." While the early auction estimate on the Man Of Steel boots was that they would sell for between $500 and $700, early bidding has already hit $1,100. Julien's Live also has a George Reeves Signed Cut Sheet, Superman III Reference Boots, and a Superman IV Christopher Reeve Flying Suit up for auction but none of those items have yet received bids in excess of the minimum starting bid. The Man of Steel is set to be released in movie theaters in the United States on June 14, 2013.

Man Of Steel Boots Top A Grand In Auction