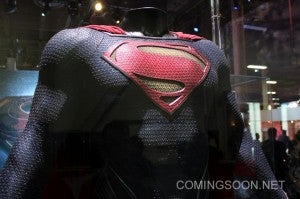 Last week, ComicBook.com reported that Christopher Reeve's and Marlon Brando's costumes from Superman: The Movie were going under the hammer this summer. That story ran with images of the original suits--which you can now compare to their successors if you're lucky enough to be in Las Vegas at this week's Licensing Expo, where Henry Cavill's Superman costume and the Jor-El suit worn by Russell Crowe are on display, along with Antje Traue's Faora outfit, as part of Man of Steel's presence on the show floor. The costumes, seen here, have been seen in set photos and other unofficial images before, but it's the first time fans have had a really clear, head-to-toe shot of any of them. In spite of earlier speculation that the Superman costume would look more like it does in the world of the New 52, it actually looks a bit more like the one worn by the hero in Smallville Season 11. RoboCop, Jurassic Park 3D and A Good Day to Die Hard were among the movies represented at the Las Vegas Licensing Expo according to a story at ComingSoon.net. [gallery link="file" order="DESC"]