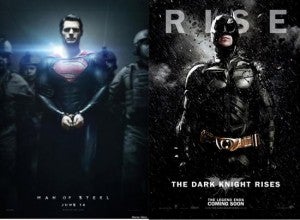 For several months, there have been various rumors suggesting that Christian Bale might return to play Batman again in either a Justice League movie or a World's Finest movie starring Batman & Superman. Around a week ago, Henry Cavill was asked about his thoughts on a World's Finest movie. Cavill responded, "I think it would be really interesting with the age-old Batman/Superman conflict, because they are two different sides of the same coin and their methods are entirely different. And I think it would actually make for an interesting story as to why, first of all, they were going head to head and how. I think that would make a great story." In an interview with Breakfast Television Toronto, a similar question was put to Man Of Steel director Zack Snyder. The interviewer asked, "Is is true that you may be fusing Superman and Batman together in the epic super-fight superhero flick?" Zack Snyder responded, "I haven't heard that, but that sounds awesome." Even though both Cavill and Snyder seem to like the idea, it doesn't appear as if there are any concrete plans at the moment. When the interviewer pointed out this is how rumors get started, Zack Snyder agreed, "This is literally how rumors get started. No, I did not know that." Like others in the Canadian press, the interviewer also got to see an early screening of the Man Of Steel this week. While long reviews are still embargoed, the interviewer gave a three word review: "I loved it." The Man Of Steel is scheduled to open at theaters in the United States on June 14, 2013.