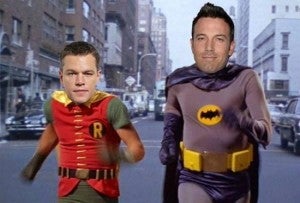 When Warner Bros. announced that Ben Affleck had been cast in the role of Batman in the Man Of Steel follow-up, thousands of people immediately turned to Twitter to joke that Matt Damon would be playing Robin. In fact, many fans even photo-shopped Matt Damon's head onto Robin's body. While the idea of Matt Damon as Robin was just mostly jokes and speculation, we pointed out that it probably wouldn't be long before Damon got asked that question by the press. Even though Matt Damon is out of the country in India, it turns out he couldn't escape the Robin question. The Times Of  India scored the scoop of being the first to be able to report an official denial from Matt Damon. Damon said, "I am a little older than Ben. I never saw Robin as older than Batman. Somebody sent me a picture actually (of his face photoshopped on Robin's body and Ben's on Batman's). It was really funny. But it's safe to say I won't be Robin." However, even though Matt Damon isn't willing to put on the Robin costume, he did offer up some strong words of support for his pal Ben Affleck. In regards to Affeck as Batman, Damon said, "I think it will be great. It will be terrific. I know there are a lot of people grousing on the internet. I just think it's kind of funny. You know, he's not playing King Lear. It's Batman! Certainly within his skill set. If anybody saw Argo or The Town, and all the work he's been doing lately, it's way more nuanced and interesting and way more difficult than Batman! Batman just sits there with his cowl over his head and whispers in a kinda gruff voice at people. Bruce Wayne is the more challenging part of the role, and Ben will be great at that." Batman Vs. Superman is scheduled to be released in movie theaters on July 17, 2015.