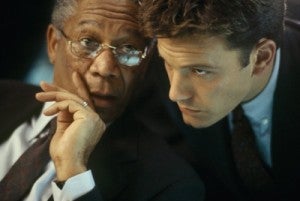 Famed actor Morgan Freeman told USA Today in a new interview that he doesn't expect to return to the DC Universe as Lucius Fox, saying that bringing in supporting characters from the Christopher Nolan-directed Dark Knight Trilogy "doesn't seem to work." "If the new movie does have a Lucius Fox I don't think it's going to be me," said Freeman. "It doesn't seem to work to mix characters in the movies. If you are going to change the lead character, you're probably going to change all the characters." Of course, not everyone feels that way; shortly after the release of The Dark Knight Rises, Michael Caine expressed a desire to return as Alfred Pennyworth in the next iteration of the franchise. "I said to [Christopher Nolan], 'If they do it again and they ask me to be the Butler, I'm going to do it,'" Caine said in a December 2012 interview. "He said, 'I want 10%.'" Freeman, who starred in the Ben Affleck-directed Gone Baby Gone, was surprised to learn that Affleck has been cast in the iconic superhero role--because he didn't think there would be another movie so soon. "This is the first I am hearing of it. My first reactions are 'Wow' and 'Good luck'," Freeman said when he learned his onetime director was taking the role. "After the trilogy, I thought that no one would try it again for a few years more to let this whole thing die down, because it's still there. So I don't know, I hope Ben does well."

Morgan Freeman Not Planning a Return to Batman