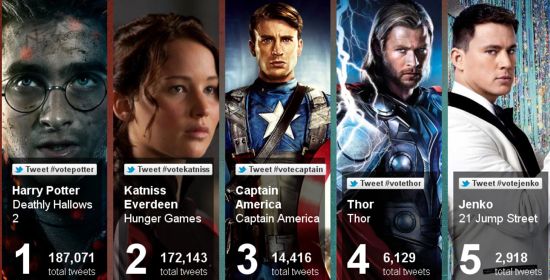 The Avengers might be the heroes of the box office, but it's all Harry Potter and Hunger Games when it comes to the MTV Movie Awards. MTV created a new category of Best Hero for the 2012 MTV Movie Awards, and fans are able to vote via twitter using hashtags. The nominees for the Best Hero category are Harry Potter, "Harry Potter and The Deathly Hallows, Part 2 (#votepotter); Katniss Everdeen, "The Hunger Games" (#votekatniss); Thor, "Thor" (#votethor); Captain America, "Captain America" (#votecaptain), and Jenko, "21 Jump Street" (#votejenko). Voting kicked off on this past Tuesday, May 29 and continues through to the live show on June 3. As of today, Saturday, June 2, Harry Potter and Katniss are whipping Thor, Captain America, and Jenko by a wide margin. While tweet counts are growing by the second, at the time of this article, Harry Potter was in the lead with over 187 thousand tweets. Katniss was in a close second with over 172 thousand tweets. Captain Americawas a distant third with only a little over 14 thousand tweets. Thor was in fourth with just over 6 thousand tweets, and poor Jenko was last with less than 3 thousand tweets. If you would like to help get Captain America and Thor get back in the running, then tweet the hashtags #votethor and #votecaptain on Twitter. The winner for Best Hero will be announced during the live show on MTV, Sunday, June 3 at 9 PM ET/PT.