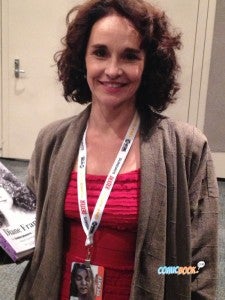 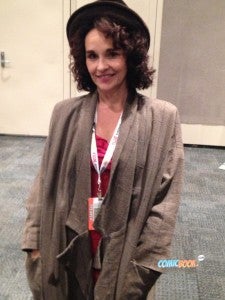 And of course, you're best known for your comic roles, so there's likely to be some crossover anyway between your fans and Olivia's.

Yeah, they'll love these films. She's hysterical. One time, which was great, Savage Steve Holland was working on Big Time Rush and he let her be his shadow and walk through things. I told her, "Olivia, this is a gift." And when it was done she didn't want to leave. When it happened I guess she was about 15, but she had already won a couple of awards for the films she's done so he knew that she was professional in what she was doing. They were just talking about the shots. And he's just the greatest guy in the world--anyone who knows Better Off Dead knows that Steve is amazing. He treats everyone with respect; we had the best time on Better Off Dead, I can't say enough about Steve. And of course he wrote your introduction in the book. Oh, this is a great story. I thought--if I'm 97 and I'm looking back at this book, who would I want to do the foreword? And I'm thinking, do I want a journalist, do I want an actor? And I thought, "I want Steve. I want Savage. Savage is going to make me feel good." Because that was such a wonderful film for me and he believed in me to be able to do it. It was a big step for my career emotionally. So I called him up and I said, "Okay, Savage, I have a question. Would you mind doing a foreword? It doesn't have to be a lot, it could be like a sentence, but could you just give me something for a foreword?" He said, "Oh, I'd love to but I may not be able to get it back to you for two weeks because I'm working." I said fine, whatever, no rush. The next day, I get it--he says, "I couldn't wait to write it and I just stayed up all night and wrote this." And I read it, and it's like this love letter to Diane Franklin. It's the most amazing, wonderful thing he's shared with me and the fans, so I just want everybody to know that this is something...this book is made of love. Even my editor, his name is Michael Picarella--I was like, "Who do I want to edit this book?" If I get someone from a publishing company, they might be very critical of it and want to change a lot of things. That's not necessarily true, but then I thought about getting a student, somebody young and hip--but they may not have the time and they may not understand the genre. Then there is this guy who writes newspaper articles but he also edits, and he's a filmmaker and he happens to be obsessed with '80s movies. So he got me--he got it. I told him, "When you go through this book, please don't edit too much. Don't change the cadence. I wanted readers to feel that this is a primary source, that it's my words and you're sitting and talking to me for a few hours and I'm telling you all these tidbits. And he was wonderful--he was a great editor for me. It's more primary--and so it's great because it's not just fun for everybody to read but it's also somewhat historical. Somebody from college could use this book as reference for what it was like in the '80s. Because I published it, I was able to do that. It didn't have to go down the line of hearsay from so-and-so.