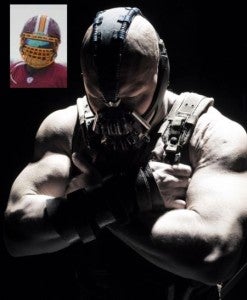 The Dark Knight Rises appears to be linked with the NFL in several ways. Most notable, a scene from The Dark Knight Rises was filmed at Heinz Field in Pittsburgh with several Pittsburgh Steelers playing football players in the movie. Now, NFL players appear to be adopting face masks inspired by Bane, the Batman villain from The Dark Knight Rises. When the Baltimore Ravens made their run to the Super Bowl, many fans began referring to Ray Lewis' face mask as being reminiscent of Bane. Several other NFL players have also taken to wearing what have been labeled as Bane face masks.  Indianapolis Colts defensive end Robert Mathis and Washington Redskins outside linebacker Brian Orakpo have both been wearing Bane face masks during training camp. In fact, Orakpo even referenced The Dark Knight Rises when talking about his face mask, saying, "Think Bane from Batman." However, the NFL apparently doesn't like the idea of seeing Bane running up and down the field in a game, and they have instituted a ban on Bane face masks. According to NFL.com, League spokesman Brian McCarthy said the Bane face masks are considered a prohibited non-standard customized face mask. Players would only be allowed to wear this type of mask if they had specific medical reasons. Ironically, Bane did wear his mask for medical reasons in The Dark Knight Rises, as it pumped in painkillers to allow him to deal with pain from previous injuries. Fans have been encouraging the players involved to appeal the bans, and several fans are complaining this is another example of the NFL becoming the No Fun League. However, considering what Bane wound up doing to the football field in The Dark Knight Rises, perhaps the NFL just doesn't want anyone looking anything like Bane anywhere near one of their fields.