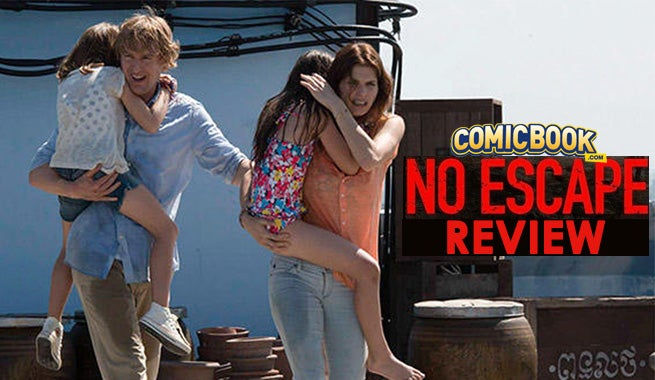 If you see No Escape this weekend, bring a pacemaker and an oxygen tank. It may very well be the most breathtaking film you'll see all year.

In No Escape, Owen Wilson's Jack Dwyer is hurled into a world where he is the trophy target of a civilian uprising. There is no help. There is no way out. There is only as much distance between Jack and the enemy as he can create. And it's never enough. It even forces him to throw his daughters from one rooftop to another, which is easy to brush off in the trailer, but is actually one of the most astonishing and shocking film sequences in a long time.

No Escape kicks off with a bit of an unnecessary and sudden ambassador assassination scene before introducing us to Jack Dwyer and his family. It doesn't have much impact on the film aside from a later mention and maybe being the reason all hell can break loose. Without it, the audience would have no idea what's coming, which may have otherwise offered more of an overwhelming surprise element. Instead, following the violent opening sequence, the pacing feels painfully slow in its brief shadow as we watch the Dwyer's meet their new home for the first time. But when the ball gets rolling, it doesn't stop. If you're going to get on this train, you better be ready to ride it to the end of the rails, constantly gaining momentum along the way.

One of the big questions going into this film was how Owen Wilson would do in a serious role. He typically plays the loving, funny guy in raunchy comedies like Wedding Crashers or Zoolander, but in No Escape, Wilson is tossed into an action thriller for the first time in a long while. Just like his character, Wilson learns to adapt to his world, and delivers an adrenaline pounding performance. Sure, the role of loving and protective father may not be too outside of Wilson's wheelhouse, but we've never seen him bash people's heads in with bricks. That struggle for survival makes Wilson terrifyingly good.

But what about his costar, Pierce Brosnan? You remember him - he used to be James Bond. Well, in No Escape, Brosnan plays a character who is basically Max Payne with an accent (the Max Payne 3 version, too). His character has allegedly lost everything, he spends his days dressed in Hawaiian shirts smoking weed, and is damn good with a gun. Brosnan, in fact, steals the show. Put him in more movies, Hollywood. While he isn't given nearly the amount of screen time he earned in No Escape, this fact makes his appearances that much more appreciated and fun.

Director John Erick Dowdle (As Above, So Below), did make a few frustrating cinematic choices, however. No Escape was shot on location in Thailand, so why does he keep the camera so tight so frequently? From what we can see, the film's locations look great, however, the cameras are so often tight on Jack or his wife (Lake Bell), that we don't get to explore the visually rich setting. But - assuming this film had a significantly smaller budget than most big summer releases, credit must still go to Dowdle for crafting a terrifying and intense thrill ride.

No Escape's well-written script not only calls for the intense hope and will for survival, but also intense mystery. For a large part of the film, we're wondering why this coup is taking place and who the heck Brosnan's "Hammond" is. Finally, late in the second act, we get some exposition in the form of Brosnan delivering criticism of global corporation domination. The action break is short lived and gives No Escape the ingredients it needed to be edible.

Bottom Line: No Escape gets a questionable start but speeds to the finish for a win. It's the most intense and breathtaking movie of 2015, with a stellar performance from Owen Wilson. 8.4/10

No Escape Review: The Most Breathtaking Movie Of 2015