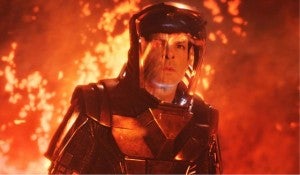 Both William Shatner and Leonard Nimoy have said they'd like to appear in the forthcoming Star Wars Episode VII, but Nimoy's reboot replacement--Zachary Quinto, who plays Mr. Spock in the J.J. Abrams-directed Star Trek and Star Trek Into Darkness--says he's not going to be appearing in Abrams's Star Wars sequels. At the Fan Expo Canada show, Quinto explained that he doesn't think Abrams is particularly interested in bringing Star Trek cast members over to Star Wars--and that if asked, he doesn't think he would be able to do it anyway. "I don't think that that would be...I think that I would be attacked if I turned up in the Star Wars franchise," said Quinto. "No, I don't think so. I was just with [J.J. Abrams] for an extended time in Japan; I imagine if he had any inklings toward that, he would have probably floated out. And I don't think I could do it, I really don't. And I don't think I would do it." The actor added, "I don't think he would be interested in cross-pollinating in that way. We're going to be shooting our third movie probably--also don't quote me on this--sometime next year, so I imagine there would be some overlay and I wouldn't be able to do both anyway." The follow-up to Star Trek Into Darkness has been rumored as filming next year, with an eye toward getting the film in theaters in time for the 50th anniversary of the original TV series, which hits in 2016. Abrams will no longer direct, as he's busy with Star Wars, but screenwriters Roberto Orci and Alex Kurtzman will return, possibly to work with G.I. Joe: Retaliation director Jon M. Chu.