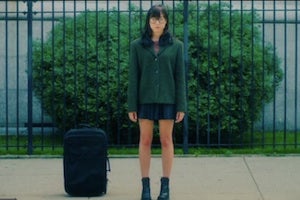 Her Parks and Recreation husband Chris Pratt is starring as Peter Quill--Star Lord--in James Gunn's upcoming adaptation of Guardians of the Galaxy, while her director from Safety Not Guaranteed is taking on the Jurassic Park franchise next. Oh, and she already appeared in a comic book movie, in the form of Scott Pilgrim Vs. the World, from Ant-Man director Edgar Wright. So is it really a surprise that Aubrey Plaza, who recently starred in a popular viral video wherein she made a live-action Daria trailer, is expressing interest in a superhero film? Probably not--although it doesn't seem as though she's very serious about it. Asked what was on her "Hollywood to-do list" while promoting her new sex comedy The To-Do List, Plaza responded, "I really got a taste of doing some physical comedy in The To Do List and I really want to do that more, whatever kind it is. Maybe some action...superhero comedy. If they would have me, please Marvel. I want to be a superhero, that's definitely on my to-do list." She joked about walking around Comic Con, just handing out photos in the hopes of getting Marvel Studios executives excited...about the prospect of casting her as Wonder Woman. Obviously, Wonder Woman isn't a Marvel property--but Plaza likely knows that and is having a little fun with the reporter, so steady your pitchforks for now. In case anyone couldn't see that she was joking (we hope), she also told EW that she hoped to one day appear on a movie poster with Nicolas Cage. "And I'd like that campaign to start--today! Wonder Woman!" She added, saying that she would also like to do a remake of Halle Berry's poorly-received Catwoman movie. "I want to be Catwoman someday. Don't laugh at me—I can do it. I want to remake Halle Berry's Catwoman and star in it. Please let me. That movie is amazing," she joked, adding, "I want to do a play. I don't care about awards, but I do want to do a play. A well-respected play. I want to do a staged Broadway version of Catwoman that's directed by Philip Seymour Hoffman where Nicolas Cage plays Batman. Please let's do it now."