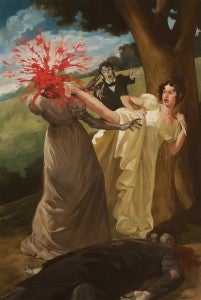 Panorama Media announced today they are joining Darko Entertainment, Handsomecharlie Films and producer Allison Shearmur in the production of Seth Grahame-Smith's Pride and Prejudice and Zombies. The company, who sold Zero Dark Thirty last year, will come on to produce, finance and will handle foreign sales on the film. David O. Russell, the director of this year's Oscar heavy The Silver Linings Playbook, wrote the most recent draft of the script. The film will be produced by Darko Entertainment's Sean McKittrick, Natalie Portman, Annette Savitch and Allison Shearmur of Allison Shearmur Productions. It will be executive produced by Darko's Edward H. Hamm Jr., Aleen Keshishian and Panorama's Marc Butan. The paperback copy of the romance/horror mash-up has sold over 1.5 million copies in the US, and has been translated into over two dozen languages.

Pride and Prejudice and Zombies Movie Back On Track