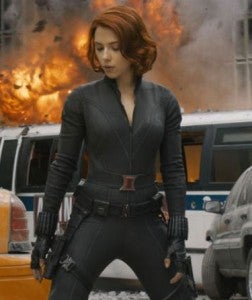 According to Screenrant, Black Widow will not be appearing in Iron Man 3. Their reported source for this information is none other than Scarlett Johannson herself. Last month, a casting company listed Scarlett Johannson among the stars returning for Iron Man 3, and pretty much everyone took it as gospel. Of course, Scarlett Johannson not appearing in Iron Man 3 fits with descriptions of Iron Man 3 being very centered around Tony Stark.  In fact, even though virtually no one else has picked up on this, Robert Downey Jr. has been surprisingly absent from recent Avengers promotions. As reported by Comicbook.com, Robert Downey Jr. arrived in Wilmington, North Carolina on Friday of last week. Over the last five days, he has been spotted on the beach, at local Wilmington restaurants, and at downtown Wilmington stores. While no one will officially confirm what Robert Downey Jr. is doing in Wilmington, some locals have heard that he is doing filming for Iron Man 3. Most have been discounting this rumor, because casting is still going on for Iron Man 3 and the official reports have said filming won't start for a couple weeks. However, if Iron Man 3 is very Tony Stark centered with scenes of Stark by himself in his lab, then Robert Downey Jr. could be shooting solo scenes. Why else would he take off during the middle of Avengers promotions and pop-up in Wilmington, North Carolina? Does anyone think he just wanted to get some early shopping done in a city where he's going to be spending the next several months anyway?

Scarlett Johannson Not In Iron Man 3