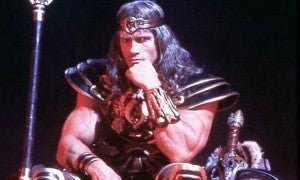 Arnold Schwarzenegger, no longer the governor of California and now back at work in Hollywood full-time, has agreed to star in The Legend of Conan, a 2014 sequel to Conan the Barbarian. No, not the Conan the Barbarian that just came out last year with Jason Momoa. Schwarzenegger is making a sequel to the 1982 version in which he starred--the movie that put him on the map as an actor. He followed up the movie with Conan the Destroyer in 1984, but neither that nor the Momoa film will be considered "canon" for this new sequel, according to producer Chris Morgan. "After the original seminal movie, all that came after looked silly to me," Morgan told Deadline. "Robert E. Howard's mythology and some great philosophy from Nietzsche to Atilla the Hun was layered in the original film. People say, he didn't speak for the first 20 minutes of the film, but that was calculated in depicting this man who takes control of life with his own hand. This movie picks up Conan where Arnold is now in his life, and we will be able to use the fact that he has aged in this story. I love the property of Conan so much that I wouldn't touch it unless we came up with something worthy. We think this is a worthy successor to the original film. Think of this as Conan's Unforgiven." Cherry picking which films in a franchise "count" rather than just rebooting the franchise altogether, is a more rare approach, but it's not unheard of. Bryan Singer's Superman Returns took place in the space between Superman II and Superman III, implying that Superman III and Superman IV: The Quest For Peace never occurred following the events of Superman Returns. Such retroactive changes to continuity are common in comic books, but less so in movies, where the all-or-nothing approach tends to be easier for casual viewers to understand. "I always loved the Conan character and I'm honored to be asked to step into the role once again," Schwarzenegger said. "I can't wait to work with Universal and the great team of Fredrik Malmberg and Chris Morgan to develop the next step of this truly epic story."

Schwarzenegger To Star In Conan the Barbarian Sequel