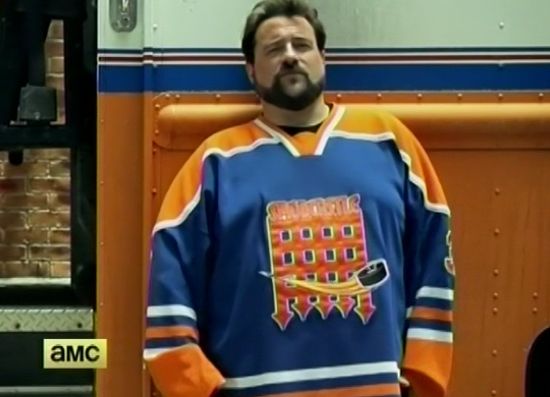 Filmmaker and professional geek Kevin Smith doesn't know anything more about the possibility of Batman V Superman: Dawn of Justice photos or footage showing up at the Warner Bros. panel this weekend at Comic-Con International: San Diego than you do, he told ComicBook.com at a red carpet interview ahead of the Sin City: A Dame to Kill For party at Comic Con late last night.

The Chasing Amy director said during the interview that Warner Bros. doesn't want him anywhere near their anticipated Comic Con panel, but that while he's leaving the show and heading back on the road home, he's figured out a way to stay informed.

Smith joined ComicBook.com on the red carpet at the Sin City event to talk about comics, movies and Comic-Con itself.

The last time I talked to you was fifteen years ago. We were talking about Dogma's distribution troubles. How'd that work out for you?

It worked out okay! We finally got the movie out there; a few people saw it.

I wish. This is the one place in the world where people aren't like "There goes that fat f---ing guy who got thrown off a plane." Here they go like, "Oh there's that guy -- he likes comics, wears that jersey all the time." They still don't know my name but there's a little more recognition here.

With Ralph Garman. He's doing all the heavy lifting. I usually do something where I'm like "Here's a scene," and he's like, "This would never work and they'd never say it like this," then he rewrites me [laughs].

A lot of people were skeptical about you hitting Batman '66 and now they're coming back to us with praise.

I credit Ralph Garman. He was the guy. If I was left to my own devices, I'm sure there'd be dick jokes in there somewhere. There are a few even now but they're very Bill Dozier kind of dick jokes. He's such an ardent, hardcore fan of what we now call Batman '66 but we used to just call "TV Batman."

Where are we coming along on Clerks 3 at this point?

You're friends with Robert [Rodriguez] and with Rosario [Dawson]. Who brought you out to the Sin City event?

My kid wanted to go! I'm so not the party guy when it comes to Comic Con. I like to do my panels and s--t, then just go back to the hotel room, smoke weed, watch what's on the Spectravision. They got Amazing Spider-Man 2 is on in the hotel and they dragged me out to see a f---ing party! So -- kid wants to go to the party, I love the Weinstein Company, Bob Weinstein, Dimension and whatnot -- Robert. So, easy party to come to. It's like old home -- family, if you will.

Are you going to be invited to the Warner Bros. panel? You've been everywhere for Batman V Superman!

[Laughs] I doubt it. I think I'm the last guy you want around because I've got such a big mouth. I'm not going to be here for the panel because I leave home on Saturday, but [Jay] Mewes is staying so I told him to keep his phone and FaceTime so basically, I'll be in the car going home and just hold it up so I can watch the whole panel.

You can check out the video below -- along with a bit more irrelevant chatter between myself and Smith.

SDCC Exclusive: Kevin Smith On Sin City: A Dame to Kill For, Batman '66 and the Warner Bros. Panel