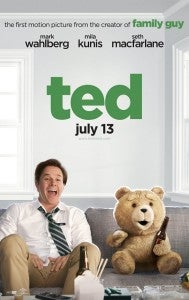 , the feature film debut of Family Guy creator Seth MacFarlane, made over $20 million last night and is on pace to make more than $50 million this weekend, and take the top spot. The competition is stiff, though (no inappropriate pun intended), as Channing Tatum's stripper movie Magic Mike made over $19 million during the same time period and will likely end up very close to Ted, according to estimates at Box Office Mojo. Deadline predicts that the movies will make $51 million and $45 million respectively this weekend. The rest of the top five is rounded out by Brave (which made $10.5 million and is expected to open at $35 million for the three days), Tyler Perry's Medea's Witness Protection ($10.2 million and $26 million) and Madagascar 3: Europe's Most Wanted ($4.2 million, $14.5 million). Ted, of course, is out two weeks earlier than was originally planned, after G.I. Joe: Retaliation pulled out of its intended release date at the last moment. The film, which would have opened yesterday, will now open nine months from now and is currently in reshoots, which are nominally to add 3D for the international market, though rumor has it they're actually making some fairly major changes to the story. Ted, meanwhile, had been testing very strong and the studio jumped at the chance to open on the pre-holiday weekend. For the first time since its release on May 4, The Avengers fell out of the top ten, too--it passed $600 million this week domestically but is only expected to gross about $40 million more before it's out of theaters--a run that will likely last much of the summer given the film's phenomenal success.