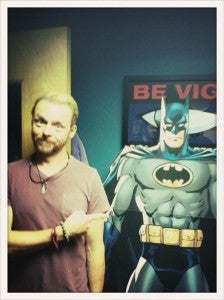 Last week, Simon Pegg set off a flurry of speculation when he tweeted a photo of himself pointing at a picture of Ant-Man while visiting the Marvel offices. Within minutes, news headlines across the Internet asked the question of if this meant that Simon Pegg had been cast as Ant-Man. Of course, it turned out that Simon Pegg was just pointing to Ant-Man as a tribute to his good friend Edgar Wright, who is directing the Ant-Man movie. In interviews and tweets after the Ant-Man picture, Simon Pegg has made it clear that he is definitely not playing Ant-Man. But what about other superheroes? Well, cue the Internet speculation, Simon Pegg has just posted a picture of himself pointing at a cut-out of Batman. Along with the photo, Pegg tweeted, "Uh...guys." Of course, this is not the first hint tying Pegg to the Batman role. Last week, Edgar Wright tweeted, "THR Breaking: Simon Pegg offered role of 'Batman' in @wbpictures 'Superman Vs Batman'. #BatPegg." While Simon Pegg and Edgar Wright are just joking of course, it's not really that much more insane a thought than some of the other Batman casting rumors out there.