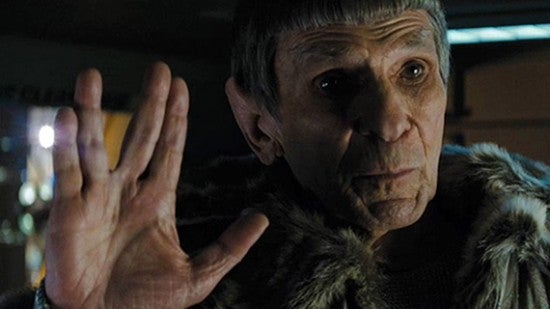 After paparazzi spotted Star Trek's Leonard Nimoy being carted around an airport in a wheelchair while breathing with an oxygen mask, fans of the iconic actor understandably worried about his health. As a result of the attention it's drawn, Nimoy took to Twitter last weekend (somehow we missed it, what with all that Super Bowl stuff going on) to explain the photographs and urge fans to quit smoking before they do permanent damage to their pulmonary system. His first comment on the matter, tweeted on January 30:

The actor then followed it up yesterday:

...And again today, after fans continued to barrage him with questions about his current state of health:

Nimoy's comments come amid a lot of public discussion of the ramifications of tobacco use, following the decision by CVS Caremark Pharmacies to discontinue sale of cigarettes and other tobacco products in their retail locations. While public health officials and President Barack Obama have praised the retailer's initiative, those in the tobacco industry and free-market activists on the right object to what they call a company making decisions for their customers. Nimoy's confessional, though, may carry some weight with fans and, based on comments made by award-winning screenwriter Aaron Sorkin earlier today, perhaps that's enough. Speaking of his collaborator Philip Seymour Hoffman, who passed away earlier this week of an apparent drug overdose, Sorkin wrote, "And [Hoffman] said this: 'If one of us dies of an overdose, probably 10 people who were about to won't.' He meant that our deaths would make news and maybe scare [am addict] clean."