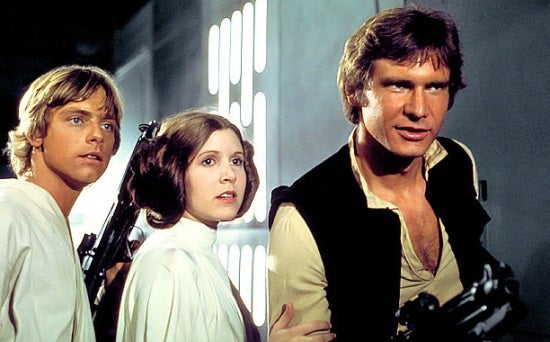 As J.J. Abrams' new Star Wars film gets ready to begin shooting in London, it seems that the original cast have all found themselves in the same area. Mark Hamill, Carrie Fischer and Harrison Ford have all dropped some hints and clues that they would be returning for Episode VII, but no one has made an official announcement as of yet yet. Entertainment Weekly pieced together the clues and the evidence seems pretty solid. Harrison Ford was seen at London's Hakkasan restaurant on April 24, and was seen again in Grosvernor's Square, speaking to crew members from London's air ambulance. Meanwhile, Carrie Fischer hasn't been shy about her plans to visit London once filming began on Episode VII. Most recently she tweeted a little hint to fans. Mark Hamill has kept his presence secret far better than his co-stars, but his cover was blown by  Peter Serafinowicz, the voice of Darth Maul in The Phantom Menace, when he tweeted a picture of them meeting up in London. Walt Disney Studios Chairman Alan Horn has publicly stated that casting for Episode VII was nearly complete. Now, with "Star Wars Day" – May 4 – fast approaching, rumors have been circulating that Disney will finally be making their big casting announcement. Could Hamill, Fischer and Ford be coming together in London in time for the big announcement? Star Wars Episode VII will come to theaters December 18, 2015.

So my do dog Gary has been spotted in London, but apparently without me. Who has he been seeing? Let me know if you have any clues. — Carrie Fisher (@carrieffisher) April 26, 2014