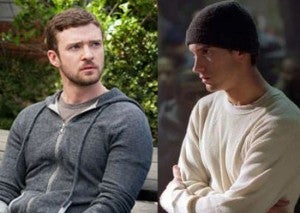 Could there be a musical feud brewing? As previously reported on Comicbook.com, Justin Timberlake recently threw his name into the ring to wear The Riddler's question-marked bowler in the upcoming Batman and Superman movie.  "I'll tell you the villain I want to play more than anything because I grew up loving Batman, funny enough, is the Riddler. The Riddler is my favorite villain," said Timberlake. But Timberlake is not the only musician who grew up loving Batman and dreaming of playing The Riddler. Back when Christopher Nolan was casting for The Dark Knight Rises, the National Enquirer reported that Eminem was interested in playing The Riddler.  Eminem reportedly rapped to his reps, "When it comes to business, you know I ain't no fiddler…You tell them Batman biggies, I wanna play 'The Riddler!'" While we normally wouldn't read too much into a report like this from a couple years ago, it was recently announced that Batman Vs. Superman will be shooting in Eminem's hometown of Detroit. When asked about the possibility of Eminem talking a role in the movie, his manager Paul Rosenberg made a rather interesting comment to the Detroit Free Press. "There's no Eminem in the Man of Steel 2 movie that I'm aware of, although I've always thought he'd be a perfect Riddler," said Rosenberg. Rosenberg also reveals that Eminem is a huge old-school comic book fan, and he often references superheroes in his music. While Eminem's manager might say he's not aware of Eminem being in the Man Of Steel 2 now, what happens when Eminem finds out that a former boy bander has his eyes on Eminem's coveted Riddler role? Which is going to be filmed right in Eminem's backyard none the less. This can only be settled by some type of rap battle or dance-off.

Step-Off Justin Timberlake, Eminem's Been After The Riddler Role In Batman For A Lot Longer