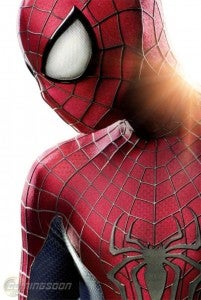 This is all unofficial information, so take it with whatever unit of salt measurement you like best. If it's true, though? Major spoilers ahead, so beware. Over at Comic Book Movie, they claim that an insider has fed them some key information about Marc Webb's upcoming The Amazing Spider-Man 2. What's he have to say?

First up, Electro (Jamie Foxx). We're told he will not be wearing anything close to his classic green and yellow outfit, and to "think Ultimate version". Again, not really unexpected. The character's civilian alter ego Max Dillon will be an Oscorp employee - oh, and that pic Webb tweeted with the morgue number? Nothing at all to do with Venom (no Eddie Brock appearance either) it's actually where Dillon is taken after his "accident". We're told there will be no Green Goblin in this movie but LOTS of teasers and foreshadowing for the next movie - apparently Norman Osborn (Chris Cooper) hasn't been cured yet and is still dying. Now for the big spoiler: Just as most of us suspected, Gwen Stacy (Emma Stone) will indeed check out in this film, but perhaps more surprising is that it's been hinted - note we don't know this for certain - that this won't even happen at the end, and Stone's role may not be very large at all. Like I said, that's speculation based on how the info was put across, but I personally wouldn't be surprised in Gwen buys it around the beginning of the third act, giving Spidey a reason to go off the deep end and seek revenge.

None of this information is particularly surprising, except perhaps the revelation that any Venom movie Sony might do will move forward without having been represented in this film. Still, the confirmation that Gwen Stacy will die here and so theoretically Mary Jane will be the love interest in the third film is notable to fans who thought we might get a trilogy where Gwen dies at the end...