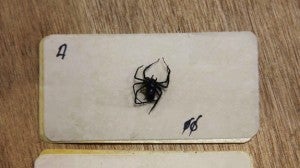 's viral campaign has spilled yet more of its secrets this week, and the good folks over at SuperHero Hype took to the Internet to do the research needed to find some new images and videos from the highly-anticipated Spider-reboot. As with previous installments of the viral campaign, the newly-revealed information focuses mostly on the genetic experiments that Dr. Curt Connors is working with at Oscorp, although it's inching closer and closer to Peter Parker and the spiders that are his totem. In addition to the photo at right, and the note below, there's the fact that with some interns recruited, Oscorp is starting to document the animal testing they're doing, including but not limited to work with an unfortunate mouse. 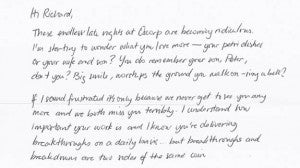 The note is another one from Mary Parker to Richard, but whereas the first one was an excited celebration of his good fortune at Oscorp, this one appears to be much more unhappy about the long hours he's working and the degree to which he's been letting the work get to him. "Breakthroughs and breakdowns are two sides of the same coin," she warns, which is of course advice that both Dr. Connors and Oscorp's founder and CEO would do well to take to heart. Still no sign of Peter himself, though, which is hardly surprising. The viral campaign seems aimed at acting as kind of a de facto prequel to the film, allowing fans to get a sneak peek inside the villain's logic, and to that end it's succeeding admirably. The Amazing Spider-Man opens on July 3, but you can catch a six-minute preview of the film playing with select screenings of Men in Black 3 this weekend.