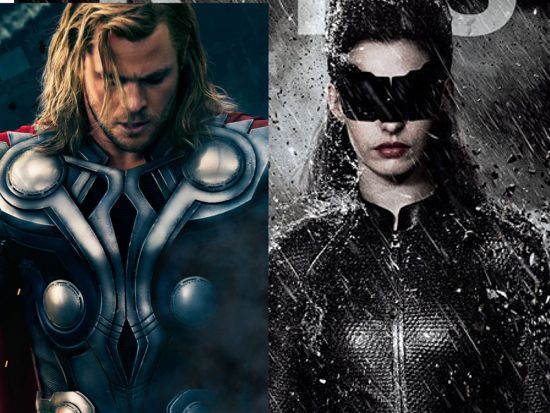 What are the top Halloween costumes for moviegoers this year? It should come as no surprise that costumes from the most popular movies of the year seem to be the top choices. In a survey conducted by Fandago, more than one thousand film fans were asked to select their top movie-inspired Halloween costume picks. Fans were allowed to select both from 2012 releases as well as classic and iconic films. The Avengers claimed four of the top five spots among men, while a character from The Dark Knight Rises was the clear top choice for women. The men in the poll chose Chris Hemsworth's Thor as the top choice, followed closely by Robert Downey Jr.'s Iron Man, Chris Evans' Captain America and Mark Ruffalo's Hulk. Christian Bale's Batman from The Dark Knight Rises finished in fifth place. The women in the poll chose Anne Hathaway's Catwoman from The Dark Knight Rises as the clear top choice, while Jennifer Lawrence's Katniss from The Hunger Games finished in second place.  Kristen Stewart's Snow White and Charlize Theron's Queen Ravenna from Snow White and the Huntsman finished in third and fourth place respectively. Scarlett Johansson's Black Widow from The Avengers took fifth place. "It was a battle of the superheroes for top costume this year and it's fun to see the regal Thor rising to the top of the men's list, beating out the rest of the Avengers crew," said Fandango Editor-in-Chief Chuck Walton. "For women, Anne Hathaway's sexy turn as Catwoman pushed the feline fatale back onto the list and straight to the top, besting arguably this year's most talked-about female character, Katniss Everdeen." In the classic costume category, Dorothy from The Wizard of Oz was the top choice for women, while Cruella de Vil from 101 Dalmations finished second. Belle from Beauty and the Beast, Tinkerbell from Peter Pan and, surprisingly, the Mad Hatter from Alice in Wonderland took the third, fourth and fifth spots respectively. For the men, Indiana Jones was the clear top choice as their classic costume, while classic Batman took second place. Dracula, The Joker from The Dark Knight and James Bond took the third, fourth and fifth spots respectively.