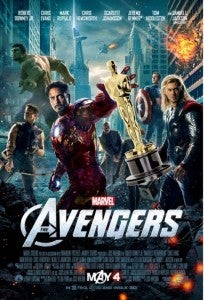 Will the Avengers get a Best Picture nomination from the Academy? Probably not, as after all, we're talking about a group that famously overlooked The Dark Knight a couple years back. At best, The Avengers might pick up a couple nominations in special effects categories, and Tom Hiddleston or Mark Ruffalo might generate some buzz in the Best Supporting Actor category, before being overlooked. However, as a movie that is already turning out to be one of the highest grossing movies of all time, I would argue that The Avengers should get a Best Picture nomination. No, I'm not saying that every movie that makes serious bank at the box office deserves a nomination, but it also shouldn't serve as a disqualifier. In an earlier post, I compared The Avengers to the first Star Wars movie, and the first Star Wars movie was nominated for an Academy Award for Best Picture. Of course, the first Star Wars movie came out in the seventies, when The Academy would still recognize an epic movie whose primary focus was to amaze and entertain. While I won't pretend that The Avengers is anything like the artsy message movies that typically win in the Best Picture category, the movie is a marvel of filmmaking in how it succeeds in entertaining. It's an epic action adventure movie that harkens back to the great movies of the seventies and the eighties. It's the type of movie that the Academy Awards should recognize but seldom does. Often the Best Picture nominees tend to center around movies that either have a breakout script or a breakout acting performance, but the overall movie might be a subject matter that fails to connect to the general public on a large scale. The Avengers is one of those rare movies that is actually great for the sum of its parts. Everything comes together from the script to the acting to the special effects to create a highly enjoyable movie, which deserves recognition as one of the best films of this year.