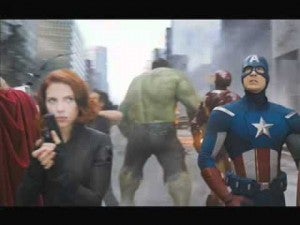 According to The Hollywood Reporter, initial tracking numbers--the gauges used to predict how well a film will perform at the box office--for The Avengers are indicating that the Marvel team-up film will earn somewhere just over $150 million on its opening weekend in the United States. If it were to do so, it would be within $10 million of The Dark Knight, the largest-ever opening for a superhero film and one of the largest opening weekends of all time, which earned $158.4 million when it opened in 2008. At the time, that was the highest opening of any film ever, but it's now been overtaken by Harry Potter and the Deathly Hallows Part 2. Coming in third on that list, according to Box Office Mojo, is The Hunger Games, which made $152 million and change when it opened earlier this year. That movie just topped the box office for the fourth week in a row since its release (the best ever for a non-sequel). Spider-Man 3 and Iron Man 2 are also in the top ten. The Hunger Games entered its opening weekend tracking much lower than its eventual total; our guess of $139 million was one of the highest out there. The tracking numbers weren't high enough to give experts a real sense of how much enthusiasm was out there for the film, and it demonstrated a margin of error of around ten percent. At the low end, that would still see The Avengers opening right around the same level as Iron Man 2, but on the high end it could overtake The Dark Knight as the second-highest superhero opening of all time. And that Harry Potter sequel? Well, it made $170 million. A ten percent margin of error would put The Avengers at around $165 million, and there's still a couple of weeks yet to build awareness and excitement for the movie. Maybe we'll get a better sense of what to expect on April 27, when it opens overseas. It hits theaters here in the land of Captain Americaon May 4.