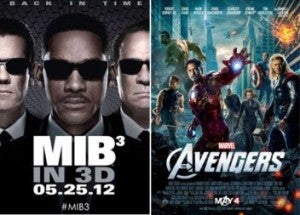 ' week-to-week gross dropped 36% on Friday, leaving the film with less than $10 million for the first weekend day since it was released and setting the stage for Men in Black 3 to take the Memorial Day weekend box office by a wide margin. (Hey, if it had to happen, at least The Avengers went down to another comic book movie!) The Marvel superhero juggernaut made $9.7 million dollars yesterday, according to estimates by Box Office Mojo, as compared to an $18 million bow by Men in Black 3. Last week, by comparison, The Avengers (then in its third week of release) took in $15.3 million on its way to a $55 million weekend. Battleship made $9 million last Friday and became the first movie ever with a budget of more than $200 to open at the domestic box office with less than $30 million. Taking into account the holiday weekend, which tends to drive more traffic to the theaters on Sunday, it's possible that The Avengers could gross $30 million in its fourth week of release, especially with the 36% drop at the box office meaning putting the film on a pace to make over $35 million should the pattern hold. In either case, the film is still outpacing Avatar, the current record-holder for the highest-grossing film of all time, and will likely pass a $500 million domestic gross today or early tomorrow. The film is currently the fourth-highest grossing film of all time both domestically and worldwide. Men in Black 3 has been projected to open at between $70 and $80 million this weekend (those same estimates, incidentally, predicted more than $40 million from The Avengers this weekend, which would put the film's domestic tally within striking distance of The Dark Knight's $533 million total), with some analysts predicting it could even make $100 million. Of course, the holiday weekend means that Monday's numbers will be figured into the film's "weekend" totals, but even so it would have to outpace its Friday to meet expectations. If The Avengers took in nearly $16 million last Friday, after all, and ended up with only $55 million, it's difficult to believe that an $18 million opening day could translate to a $75 million opening weekend, although as discussed above, the Memorial Day holiday throws normal math and expectations out the window. Still, those relatively low numbers match up with the dismal showing it turned in at midnight screenings, where it made only $1.2 million Thursday night/Friday morning, lagging behind not only The Hangover Part II (which opened at more than $10 million at similar screenings last Memorial Day) but previous box office disappointments like Sex and the City 2.

The Avengers Takes Second to Men in Black 3 on Friday

Jordan Peele Teases "A Few Ideas" for Next Movie