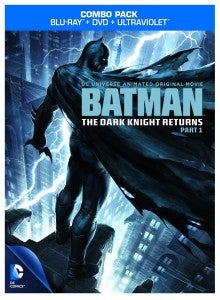 Warner Animation has released the first clip for the upcoming direct-to-video animated feature film Batman: The Dark Knight Returns, Part 1. In a little less than a minute, fans are treated not only to the most iconic single image from the Frank Miller/Lynn Varley classic graphic novel upon which the film is based, but the "we're in for a show" moment that was echoed in the recent blockbuster film The Dark Knight Rises. Check it out below.