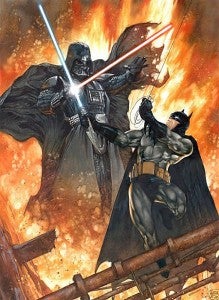 Earlier this week, The Dark Knight Rises surpassed a total global theatrical gross of $800 million, becoming only the 34th film in history to do so. The final chapter in Christopher Nolan's Batman trilogy overtook the $800 million milestone on Monday and has continued to cruise worldwide, with Warner Brothers still hoping the film will make $1 billion before its run in theaters is through. Presently, the film has a worldwide gross of roughly $840 million, which is good for 29th place in the history books, and it will more likely than not overtake Star Wars Episode III: Revenge of the Sith (with a worldwide historical gross of $848.8 million) today or tomorrow. Of course, Star Wars Episode III will get a 3D reissue soon, which will massage the numbers upwards again--but by then The Dark Knight Rises will be out of theaters and, if all goes according to the studio's plans, have made at least another $150 million. The film has made $392 million in the U.S. so far, which is good for the third-highest theatrical gross of the year and the fifteenth-best all time. It's expected to pass The Hunger Games on the 2012 list in the next few days.