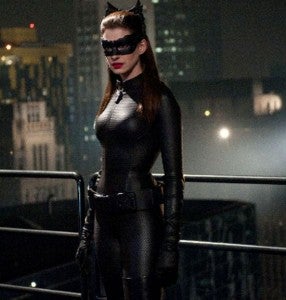 President Barack Obama is a well-known comic book fan. In the past, it has been revealed that he collects Spider-Man and Conan the Barbarian comic books. In an appearance on The View earlier this summer, President Obama also revealed that he had seen The Avengers. But what about The Dark Knight Rises? Is the President strictly a Marvel fan? Or does he get into DC Comics characters as well? Now, we finally have the answer. During a fundraiser at producer Harvey Weinstein's Connecticut home, President Obama weighed in on exactly what he thought of the finale of Christopher Nolan's Batman trilogy. Anne Hathaway, who plays Catwoman in The Dark Knight Rises, was a co-host at the event. Speaking in regards to Hathaway, President Obama said, "She's spectacular. I got a chance to see Batman, and she was the best thing in it. That's just my personal opinion." So now we know that in addition to Spider-Man and Conan the Barbarian, the President of the United States is also a Catwoman fan.