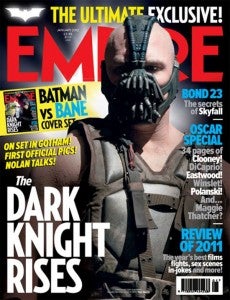 Empire Magazine made a major score in getting Christopher Nolan and Tom Hardy to open up about the heavily secretive Dark Knight Rises. Official information on The Dark Knight Rises has been hard to come by, as most of the stars are under strict orders not to talk to the press about the film. However, Empire scored interviews with Nolan and several of the stars for an issue that is hitting stores this week. Empire has been gradually releasing some of the details of the interviews on their website. First, Nolan has confirmed that there will be a prologue of The Dark Knight Rises in select IMAX cinemas on December 21 in advance of Mission Impossible – Ghost Protocol. According to Nolan, The Dark Knight Rises Prologue will be "basically the first six, seven minutes of the film." The prologue will serve as "an introduction to Bane, and a taste of the rest of the film." As far as the plot line, Christopher Nolan revealed, "It's really all about finishing Batman and Bruce Wayne's story. We left him in a very precarious place. Perhaps surprisingly for some people, our story picks up quite a bit later, eight years after The Dark Knight. So he's an older Bruce Wayne; he's not in a great state." This is very interesting news from Nolan, as there had been no previous indication that the film would be set that far in the future after The Dark Knight. Of course, now The Dark Knight Rises trailer where Commissioner Gordon gasps from his hospital bed about how the Batman has to come back starts to make more sense. Empire also talked to Tom Hardy, who revealed more insight into Bane. Hardy said, "He's brutal. Brutal. He's a big dude who's incredibly clinical, in the fact that he has a result-based and oriented fighting style. It's not about fighting. It's about carnage. The style is heavy-handed, heavy-footed, it's nasty. Anything from small-joint manipulation to crushing skulls, crushing rib cages, stamping on shins and knees and necks and collarbones and snapping heads off and tearing his fists through chests, ripping out spinal columns. He is a terrorist in mentality as well as brutal action." In addition to the juicy quotes from Nolan and Hardy, Empire revealed a couple more secrets about the film. In regards to Bane's costume, Bane needs gas to survive, because he's suffering from immense pain. There are pipes from his mask that go along his jawline and into two canisters on his back. The Dark Knight Rises is set to be released in theaters on July 20, 2012.