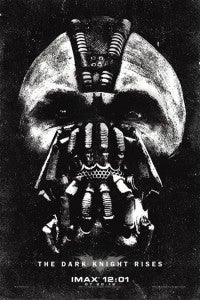 It seems like it's been ten years or more since a major, tentpole studio film didn't appear online within hours of the first U.S. screenings (if not before--The Avengers had an international release a week before the U.S. one, and was available online by that Saturday), but so far, ComicBook.com hasn't heard any credible claim that The Dark Knight Rises has become widely available online yet. With the movie playing on the second-highest number of screens of any movie in history, it would seem that pirates would have plenty of opportunity to steal and redistribute the film, but so far, that doesn't appear to be the case. We're hearing that there's a good chance it's all about increased attention being paid at the movie theaters by police, private security and theater staff following on the heels of Friday morning's tragic shooting at a midnight screening of the film in Colorado. It's unlikely, of course, that there are absolutely no bootlegs out there--after all, a healthy percentage of the illegal copies of any given film come from overseas, and presumably not every country is as fazed by the tragedy in Aurora as the U.S.--but so far, it appears that crowded screenings, combined with an obvious security presence, have combined to make it very difficult for American content thieves to get their hands on arguably the most-anticipated movie of 2012. Among entertainment industry insiders, there has of course been a good deal of talk about to what degree the terror attack in Colorado may impact the movie's opening weekend box office, with some speculation that the $170 million estimated pace that the film is on may have been substantially higher if moviegoers weren't a bit squeamish about heading right back out to the cinema following the shooting. What hasn't yet been discussed is whether the increased security could benefit the film in the long run, when a lack of illegal copies turning up online forces a some elements of the audience to attend a theatrical screening where they might not have otherwise. (Warner Brothers, the studio who distributed the film, isn't having those conversations, by the way--they've suspended television advertising for the film and are not releasing box office estimates throughout the weekend, an unconventional move for a major release.)