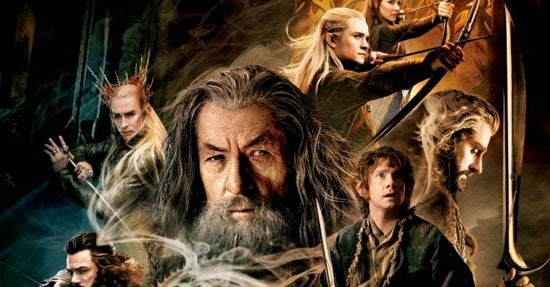 The final entry in Peter Jackson's trilogy of film's adapting J.R.R. Tolkien's The Hobbit may be getting a name change, according to TheOneRing.net. New Line Cinema has registered the title The Hobbit: Into the Fire. With only one film left to release, it seems like this would have to be a title for the final film. The Hobbit films have gone through a few name changes during development. In the original development plan, there was only supposed to be two Hobbit films: the first, titled An Unexpected Journey, and the second, There and Back Again. When the two films were extended to three, An Unexpected Journey remained the title of the first. Eventually, The Desolation of Smaug and The Battle of Five Armies were registered by New Line, but nothing ever came of The Battle of Five Armies. There and Back Again has been used by those involved in the series' production to refer to the final film of the trilogy in press releases, interviews and other publicity. It's not unusual for studios to register multiple potential names for films, just in case, but it's a bit late in the process for that now. It's possible that There and Back Again was just a name they were using as a working title until they decided on the official name, but that seems like pretty poor branding considering how widely known and used There and Back Again has become. It could be a title for something else, a tie-in project of sorts, but what, exactly, remains to be seen. There and Back Again is the alternate title of The Hobbit, and also the title of the book that Bilbo Baggins writes to recount his epic journey following the events of The Hobbit. Into the Fire is probably taken from a chapter of The Hobbit, titled "Out of the Frying Pan, Into the Fire." The Hobbit: There and Back Again (or Into the Fire) is scheduled for release on December 17.

The Hobbit: Into The Fire Might Be New Title For The Hobbit: There And Back Again