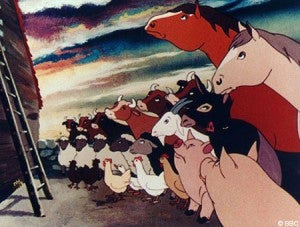 Andy Serkis, who played Gollum in Peter Jackson's Hobbit and Lord of the Rings movies, is set to direct a film adaptation of George Orwell's classic Animal Farm for Imaginarium Pictures. The movie, which will use the same kind of motion capture technology that Serkis has been strapped to for ten years or so in the Jackson films, will also likely make use of both 3D and high frame rate technology, as used in The Hobbit, Serkis told The Hollywood Reporter. Serkis has some experience with that technology, serving as the second unit director on The Hobbit trilogy. "We're keeping it fable-istic and [aimed at] a family audience," Serkis said of the film, which traces the rise of communism by depicting an uprising by animals on a farm. The story was re-told somewhat by Bill Willingham in his award-winning Vertigo series Fables. "We are not going to handle the politics in a heavy-handed fashion. It is going to be emotionally centered in a way that I don't think has been seen before. The point of view that we take will be slightly different to how it is normally portrayed and the characters, We are examining this in a new light."

"We are in proof-of-concept stage at the moment, designing characters and experimenting on our stage with the designs," Serkis said. "It is quite a wide canvas as to how much and how far we can take performance capture with quadrupeds and how much we will be using facial [capture]. We are not discounting the use of keyframe animation or puppeteering parts of animals. We are in an experimental phase; it's terribly exciting."