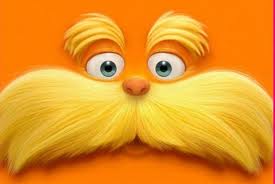 Okay, Okay--we understand that "The Lorax" isn't a comic book movie.  But we've had enough readers inquire about it that we figured we should at least follow the film at the box office.  And what a weekend the Dr. Seuss film had. While critics reviews were all over the place, that didn't stop audiences from seeing the film as it racked up a whopping $70.7 million for the weekend.  According to Box Office Mojo, not only does that make 'The Lorax' easily the best opening this year, but it comes in as the 6th best ever animated movie opening and the 3rd best March opening. The top two March openings were 'Alice in Wonderland ($116.1 million) and '300' ($70.9 million).  Unfortunately for "The Lorax," the 3rd place opening most likely will not last the month.  While "John Carter" won't break that number, you can bet that "The Hunger Games" (March 23) and "Wrath Of The Titans" (March 30) will have a decent shot.  In fact, we think "The Hunger Games" will overtake "300" and grab the 2nd overall spot for a March opening. Either way, it's great to see a Dr. Seuss classic do so well at the box office. Let's hope it continues to do well so we can see more adaptations.

The Lorax Crushes Box Office, Opens March With A Bang