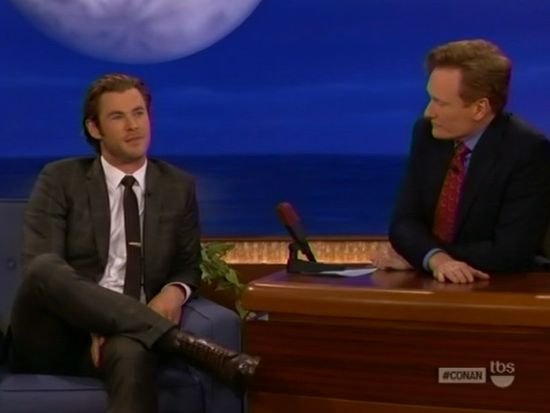 Thor: The Dark World star Chris Hemsworth is 6 foot 3 inches tall, while his co-star Natalie Portman is only 5 foot 3 inches. Portman plays Thor's love interest Jane Foster in the film, so there are certain scenes where Hemsworth and Portman kiss. During a Thursday night appearance on CONAN, Conan O'Brien asked Hemsworth what special effects were involved to make it look natural for him to be kissing an actress who is a foot shorter than him. "There was one time when we kissed, and she had to stand on a box basically," said Hemsworth. "But this [other] time we had to walk into a scene towards each other and embrace and kiss. And it looked silly her going like this (making a sudden upward motion with his hand). So what they did is they built a ramp. It was a nice gradual lift to the kiss. So she would walk up a ramp as we kissed." Thor: The Dark World opens in movie theaters in the United States on November 8, 2013.