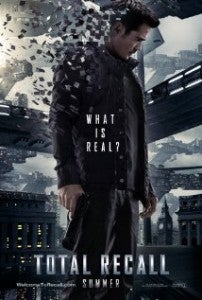 The long awaited remake of "Total Recall" is still a few months away, but the marketing for the film is picking up.  We've already seen a teaser trailer, and today, the first full length trailer arrived. Here it is:

Pretty awesome, right? Looks like something that should open in late May, doesn't it? Nope. What about June? No. July? No chance. This film has an August 3rd release. And I have to ask--why? August historically is the graveyard for films that studios didn't think could stand the heat of the Summer Blockbuster kitchen. You know, "G.I. Joe: The Rise of Cobra," "The Expendables," "Aliens vs Predator." But the remake of "Total Recall" stars Colin Farrell, who typically does well at the box office. And Kate Beckinsale and Jessica Biel have their share of fans. The film is directed by Len Wiseman, who created the "Underworld" franchise and turned it into a cash cow. His followers will see anything the guy makes. The trailer looks great, and it has $100+ million domestically written all over it. And this movie will KILL Internationally. So why the late summer date? I don't get it.

Total Recall Full Trailer Hits Net, Why is This An August Movie?