Summer blockbuster movies are supposed to captivate the eye with big visual splendor, and entertain the mind with action, adventure, and laughter. There's an old adage about those types of films wherein viewers are advised to turn off their brains and enjoy the ride - and Luc Besson's Valerian and the City of a Thousand Planets is pretty much the epitome of that concept.

The movie takes place in a distant future, where an orbiting space station called "Alpha" has steadily grown into the largest space station colony in existence; a home to millions of souls, brought together from a thousand of different planets. The sense of unity and peace amongst the different races and species of Alpha is put to the test when a mysterious radioactive zone is discovered, buried deep in the station's labyrinthine structure.

Elsewhere, federation agents Valerian (Dane DeHaan) and Laureline (Cara Delevingne) are called in to investigate a seemingly unrelated incident - but the flirtatious partners soon find themselves plunged right into the middle of the seeming plot against Alpha, which threatens to tear centuries of galactic peace and unity apart.

Based on the French comic strip series by Pierre Christin and Jean-Claude Mézières, Valerian and the City of a Thousand Planets has been Luc Besson's obsession since childhood, and a film he has long dreamed of making. It has only come along now thanks to the necessary advances in film technology, which allow the story's fantastical otherworldly settings and litany of alien beings to be convincingly realized onscreen - and therein lies the rub. Valerian is a captivating achievement of technical wizardry and imagination; however, that visual splendor gets stretched over the jumbled skeleton of a half-cooked story, and lackluster script.

In terms of direction, the movie is signature Besson-style work, mixing imaginative oddity with some offbeat comedy, romance, and violent action into a fine brew. This film is, in many ways, a spiritual successor to The Fifth Element - which will be all that some viewers need to hear, in order to take the ride. However, the real star of the show is the combined powers of visual effects houses Industrial Light and Magic (Star Wars) and Weta Workshop (The Hobbit); every creature, setting, and piece of futuristic technology in Valerian looks top-notch - and overall, the film is totally worth viewing on the big screen, in 3D format. Visually speaking, you will definitely get your money's worth.

Unfortunately, The City of a Thousand Planets falls pretty flat on the script level. It's clear from the craftsmanship of the movie just how near and dear to Besson's heart the material is; however, that same intimacy is probably what prevented him from seeking more critical edits of his script. Because the French filmmaker loves this material so much, it's as though he assumed the power of its dialogue and themes would automatically instill viewers with the same love he has; sadly, however, this is not the case. Whether by folly of nostalgia, or the common losses of linguistic/cultural translation, so much of Valerian's dialogue comes off as hokey (if not cheesy), while its narrative is somehow overly convoluted and predictable at the same time.

Thematically, the movie thinks it builds to a grandiose climax that it never earns, and the story is somehow always far away from any kind of real intimacy with or insight into its central pair. The resulting experience can best be summed up in the observation that the opening sequence of Valerian (which has little to no spoken dialogue) is by far the most beautiful and moving portion of the film.

Filling in the holes of character and story are some fun (if not great) performances. Dane DeHaan and Cara Delevingne have a sparky and flirty chemistry as Valerian and Laureline (respectively) - although neither actor ever seems certain about the subtext to his/her character. DeHaan's Valerian teeters unevenly between lovable cad (a la Han Solo) and violent douchebag; while Delevingne is working hard to try and be convincing amidst all the hollow green screen around her, while doing her best impression of other cute, witty/snarky actresses like Emma Stone or Tina Fey. On their own, neither character is that interesting to follow (Laureline is admittedly better than Valerian) - but together, their "Pepe le Pew" dance is fun enough to keep you invested. 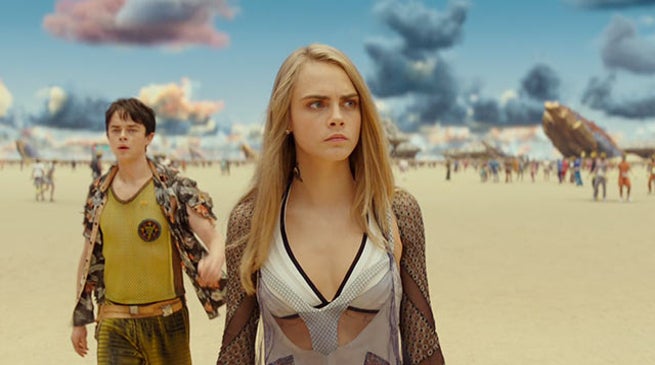 Other famous names like Ethan Hawke, Elizabeth Debicki, John Goodman, Rutger Hauer, Alain Chabat and Herbie Hancock get to have some fun playing (or voicing) fantastical / eccentric Besson types - while others (Clive Owen, Kris Wu, Sam Spruell) are surprisingly drab and boring. Rihanna has one of the bigger supporting roles in the film (no spoilers on that), and while she stuns in a big dance number, her later dramatic and comedic moments are far more wooden.

In the end, Valerian and the City of a Thousand Planets is a mixed bag that manages to get by thanks to its place in the summer movie season, where it exists like a fun beach read: thin on substance, but filled with enough exciting spectacle to be enjoyed (and then quickly forgotten). It's hard to imagine the film striking such a strong chord that expands into an entire franchise - but even if this one film is all we ever see, Luc Besson can take pride in having painted a gorgeous picture of his boyhood dreams all across the silver screen.

Valerian and the City of a Thousand Planets is now playing in theaters. It is 2 hours and 17 minutes long and is Rated PG-13 for sci-fi violence and action, suggestive material and brief language.

Like Valerian (or not)? Rate the film for yourself, below!

Valerian and the City of a Thousand Planets2017

Deadpool 3: How Wolverine and Deadpool Can Deliver A Proper Ending to Fox's X-Men Universe

Werewolf By Night Releases Behind The Scenes Footage