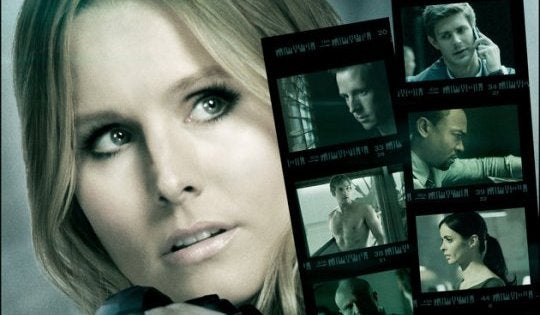 is definitely worth watching, whether you see it in the theater or you save a couple of bucks like I did and watch it on Amazon. I never saw the TV show. I think I was too old for its demographic when it was on. It seemed interesting enough but never really looking into it, I always thought it was a Nancy Drew for the internet age. The film opens with a quick two-minute catch up (see it here). "But it's not like I found a decoder ring at the bottom of a cereal box and thought 'that sounds like fun' - I wish. That would have been adorable. Nope. My best friend was murdered when I was 15. Trying to figure who did it was how I coped." With that opening, I discovered I was wrong. Veronica Mars was one of those rare,usually short-lived series that calls to a cult following from the first episode. If i was 16 in 2004, I probably would have been a huge fan of this show. Instead it wasn't until the Kickstarter that I really took notice of it, so when it popped up on Amazon as an in-theater release, I decided to check it out. And I can say now, it's quite good. 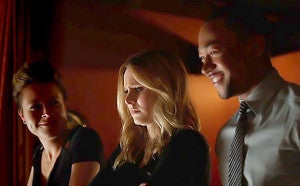 The acting, the writing and camerawork is all up to snuff - solid TV fare. Not CW TV but actually more like AMC or FX. I can't compare it to the original series, but if it's anything like this I'm definitely going to check it out on Amazon Prime (it's free for members there... unfortunately it's not on Netflix). When watching Veronica Mars you're immediately going to get the feeling that you've seen this story before - outcast, goes back same week as his/her high school reunion, people out to get him/her...sound familiar? Calling John Cusack? Yeah, I immediately though Grosse Pointe Blank too. And it shares a lot of the same plot and similar jokes. But so does every single gangster film, okay? So get over it. If I spent all my time comparing films in the same genre to earlier ones in that genre I'd never like anything new. For people like me, new to the series and the character, don't fear. There will be lots of inside jokes that you're missing - but it's not like Kevin Smith level references. They don't draw from the plot or the dialogue. And for those really into the show - I can only imagine it's going to be a referential treat. Beyond that, there's a load of interesting cameos -- mainly James Franco, who plays James Franco. Likely his only worthwhile role in the past couple of years. If not for the Kickstarter buzz, would I have actually paid for the film, as opposed to waiting for it to be on for free? Not so sure. I'm glad I did though, and based on the number of small loose ends in the film, I'm really hoping it gets a second film or a return to TV (which, after talking to Comicbook.com fellow staffer Russ Burlingame is already sort-of happening, at least digitally and in print).

Veronica Mars Review (From Someone Who Never Saw The Show): Definitely Worth Watching

Everything Coming to Paramount+ in October 2022