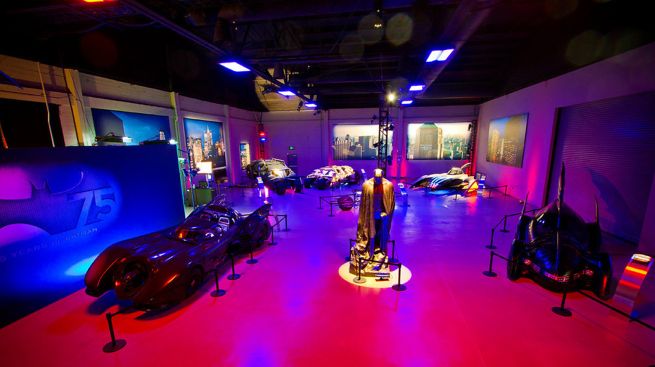 Last week, Warner Bros. Tours teased a big announcement for this week. Because they included both Batman and Superman related images in their teasers, many suspected that the announcement could be Batman V. Superman: Dawn of Justice related.

While the announcement did turn out to be Batman related, it focuses on the previous Batman movies rather than the upcoming one with Ben Affleck. In order to celebrate the 75th anniversary of DC Comics' Batman, Warner Bros. Tours is launching a brand new Batman exhibit this summer.

The Batman exhibit will include the iconic costumes, gadgetry and vehicles used in all seven previously-released, live action Batman movies. Expert tour guides will lead fans through a newly-transformed Studio Tour museum.

Six iconic Batsuits will be on display including the original version worn by Michael Keaton in Batman and the final Christian Bale costume from The Dark Knight Rises. There will also be a wide range of authentic costumes including those worn by Poison Ivy, The Riddler, Mr Freeze and Catwoman as well as some infamous prop weapons such as the Joker's cards, Two-Face's coin, Penguin's umbrella and Bane's bomb.

In Warner Bros. Picture Car Museum, which is located on the studio lot, a selection of the Dark Knight's most iconic vehicles will be showcased – with the Bathammer, Bat-Pod and Tumbler taking centre stage. The Bat-Signal, used to call Bruce Wayne's alter ego at a time of need, will be on display and fans will be given the chance to operate the infamous prop.

A limited number of specially-themed Batman carts will be available throughout the day, ready to escort film fans around the studio lot.