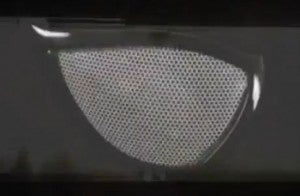 The image screen-grabbed from a video tweeted out earlier today by The Amazing Spider-Man director Marc Webb suggests a different look for Spider-Man's mask, certainly--but exactly how different? Is the black field behind the redesigned eyepieces just the result of Sony's and Webb's desire not to show off the full costume for the sequel yet--or is it possibly an indication that those eyes might be attached to a black costume? The black costume--a divisive look that is either a favorite or a source of much agita among fans depending who you talk to, debuted during the Secret Wars crossover, in which Spider-Man's costume is damaged while on an alien world. The superheroes' allies on that world construct a new suit for the wall-crawler, which included a number of convenient functions including enhancing his strength, giving him near-limitless "web fluid" and the ability to camouflage itself as his civilian clothes for a quick change. Eventually, though, Spider-Man looked into the costume's properties (long after he'd brought it home and been using it for a while), only to discover that it was actually an alien symbiote, bonded to his body and existing with a dull, Incredible Hulk-level mind of its own. Mortified, Spider-Man ditched the suit, thinking that the removal had killed it when in fact it simply waited for someone to come along who could be a suitable substitute. That substitute, eventually, became Venom.  A truncated version of that story served as one of the plotlines in Spider-Man 3. In the Ultimate Comics version of Spider-Man, upon which the new films seem to be based at least in part, the story is much different. The Venom costume is a genetically-engineered liquid "suit" designed by Eddie Brock's and Peter Parker's fathers as a cure for cancer, meant to bond to the user and protect them from harm. The suit is coded to a subject's DNA, making it difficult, painful and psychologically damaging for the "wrong" person to wear it, meaning that since it was set to Richard Parker's DNA, Peter can mostly control the suit, but Eddie Brock (the substitute alluded to above) was essentially consumed by it. It's not very likely that the black suit, let alone Venom, will turn up in the new film--but it's possible. How possible? A few things to consider: