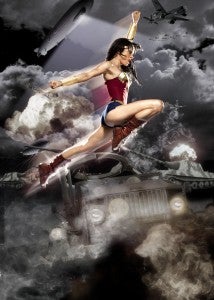 Jesse V. Johnson, who has done stunt work on movies like Avatar and Thor, has decided to try his hand at directing--and has done so in grand fashion, releasing (via Latino Review) a  new film that pushes the boundaries of "fan films" and runs squarely into the territory of proof-of-concept work. Of course, he would hardly be the first one to try and get work by creating a fan film and bringing it to the Internet. A handful of people have done that, with varying levels of success, including a pretty good S.H.I.E.L.D. webisode by graphic designer Dan Levermore, which went online shortly after the series was officially announced. A period piece set in World War II, LR touts the trailer/fan film as a look at what Warners would like to do with the character if they could ever get the movie off the ground. "It was my manager/producing partner Kailey Marsh's idea to shoot the trailer," Johnson said. "She really believes I should be a studio director, and thought shooting Wonder Woman would be a great way to show off my skills in a fun way that people could get excited about." You can check out the film--which Johnson produced with the help of cinematographer HC Van Urfalian, leading lady in actress Nina Bergman and character actor Peter Stormare, below.