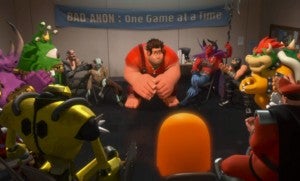 Wreck-It Ralph, the lead character of the upcoming film by the same name from Walt Disney Animation, will be featured in Sonic & All-Stars Racing Transformed, an upcoming racing video game from Sega. According to Disney, "The thrilling racing adventure allows players to race through land, air and water in new dynamic tracks inspired by classic SEGA video games. Wreck-It Ralph's unique transformable vehicles and signature All-Star move will make for some of the best racing around when he lines up against other All-Stars such as Sonic, AiAi and Danica Patrick, in both single player and multiplayer game modes." "To have Wreck-It Ralph included in Sonic & All-Stars Racing Transformed is a dream come true," said Rich Moore, director of  Wreck-It Ralph and veteran of The Simpsons, in a statement.. "The film pays homage to the video games I loved as a kid, including Sonic the Hedgehog in a special cameo, so being able to see Wreck-It Ralph in a real video game alongside Sonic and other iconic SEGA characters is unbelievably exciting for me and should be a treat for fans!" The game will be available in November on all consoles and for the PC.