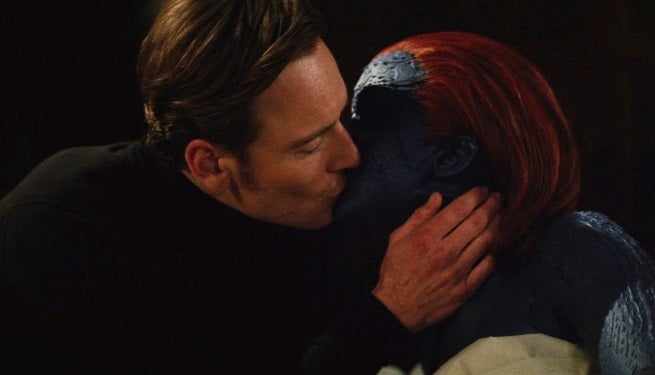 The more timelines change, the more they stay the same. A report in The Hollywood Reporter claims that the plot of X-Men: Apocalypse is being "crafted" around the romantic relationship between Mystique and Magneto.

The report credits a source who has seen the script for Apocalypse, and suggests that Fox wants to leverage the star power of Jennifer Lawrence and Michael Fassbender, who play Mystique and Magneto, respectively. Lawrence's work with director David O. Russell, and Fassbender's role in 12 Years A Slave, has turned them both into Oscar contenders – with Lawrence having won one in 2012 for Silver Lingings Playbook – and, therefore, two of the most recognizable actors currently working on the franchise.

Mystique and Magneto, while not romantically linked in X-Men comics, have been romantically (or at least sexually) linked in X-Men films since the original trilogy. X-Men: First Class played up a love triangle between Mystique, Magneto, and Beast (played by Nicholas Hoult), and X-Men: Days of Future Past hinted at continued romantic tensions. While the timeline was altered by the events of Days of Future Past, it still makes sense to have Magneto and Mystique's relationship come into full bloom in X-Men: Apocalypse.

X-Men: Apocalypse Will Center On Romance Between Mystique And Magneto