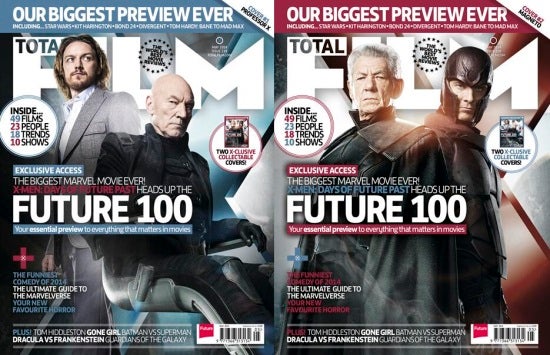 Professor X and Magneto will be featured on two collectible covers of Total Film magazine, as revealed by the magazine's Twitter feed. One cover features Patrick Stewart and James McAvoy as Charles Xavier (the elder and the younger, respectively), while the other features Ian McKellen and Michael Fassbender as "The Master of Magnetism" (again, the elder and the younger, respectively). Stewart and McKellen first portrayed the iconic X-Men leaders in the original X-Men film from 2000, and then reprised the roles again in X2: X-Men United and X-Men: The Last Stand. The roles were taken over by McAvoy and Fassbender in 2011 for the prequel film, X-Men: First Class. Those two worlds will collide in X-Men: Days of Future Past, the film adaptation of the classic X-Men time travel comic book story. The ultimate X-Men ensemble fights a war for the survival of the species across two time periods in X-Men: Days of Future Past. The characters from the original X-Men film trilogy join forces with their younger selves from X-Men: First Class in an epic battle that must change the past - to save our future. X-Men: Days of Future Past comes to theaters May 23, 2014. The collectible Total Film covers are on stands now.

The new Total Film is out now & we've got two amazing #XMen covers for you to choose from! Are you Team Mags or Prof? pic.twitter.com/GZQHXEdqhx — Total Film (@totalfilm) March 14, 2014