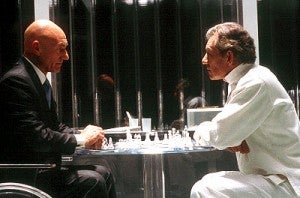 Sir Ian McKellen, who plays the power-mad mutant villain Magneto in the X-Men film franchise, will officiate over the wedding of Sir Patrick Stewart, who plays Charles Xavier, Magneto's former best friend and now arch-nemesis. Appearing on The Jonathan Ross Show, McKellen revealed earlier today, "I'm going to marry Patrick [Stewart]. I am going to officiate at his wedding." Asked under what authority McKellen, who has officiated a of civil union of two friends in the past, stands to marry Stewart and his fiancee, (jazz singer Sunny Ozell), McKellen wasn't totally sure. "I don't know," McKellen said. "But in Massachusetts, in the middle of America somewhere, you get a friend along, and I read out the words, and Sunny and Patrick will then be married. … I've done it once before with two guys having a civil partnership. I was crying my eyes out." The Hollywood Reporter explains that Massachusetts' Secretary of Commonwealth offers a service that allows a family friend or relative to perform a couple's wedding ceremony for a one-time fee of $25. McKellen and Stewart, who starred together in the first three X-Men films, will reprise their respective roles in the forthcoming "inbetweenquel," X-Men: Days of Future Past.