After a few months of build, including the introduction of a host a new Spider-Man characters from parallel worlds, the next major Spider-Man event, “Spider-Verse,” officially kicks off this week with the release of Amazing Spider-Man #9. As has been reported and reiterated to great effect by Spidey scribe Dan Slott, “Spider-Verse” is going to feature “every Spider-Man ever” (with a few exceptions due to copyright/legal issues). Of course, based on the events of some of the prologue issues we’ve been receiving since September, there’s zero guarantee that “every Spider-Man ever” is going to live to see the end of this event.

So with so many different Spider-Men to keep track of, we thought we’d rank the 10 very best alternative Earth Spider-Man stories. And similar to the list we conducted earlier this year celebrating some of the various Spider-Woman/Girl characters from around the Multiverse, this ranking will only include one story per timeline (so no doubling up on Ultimate, Spider-Man 2099 or Spider-Girl stories for example). 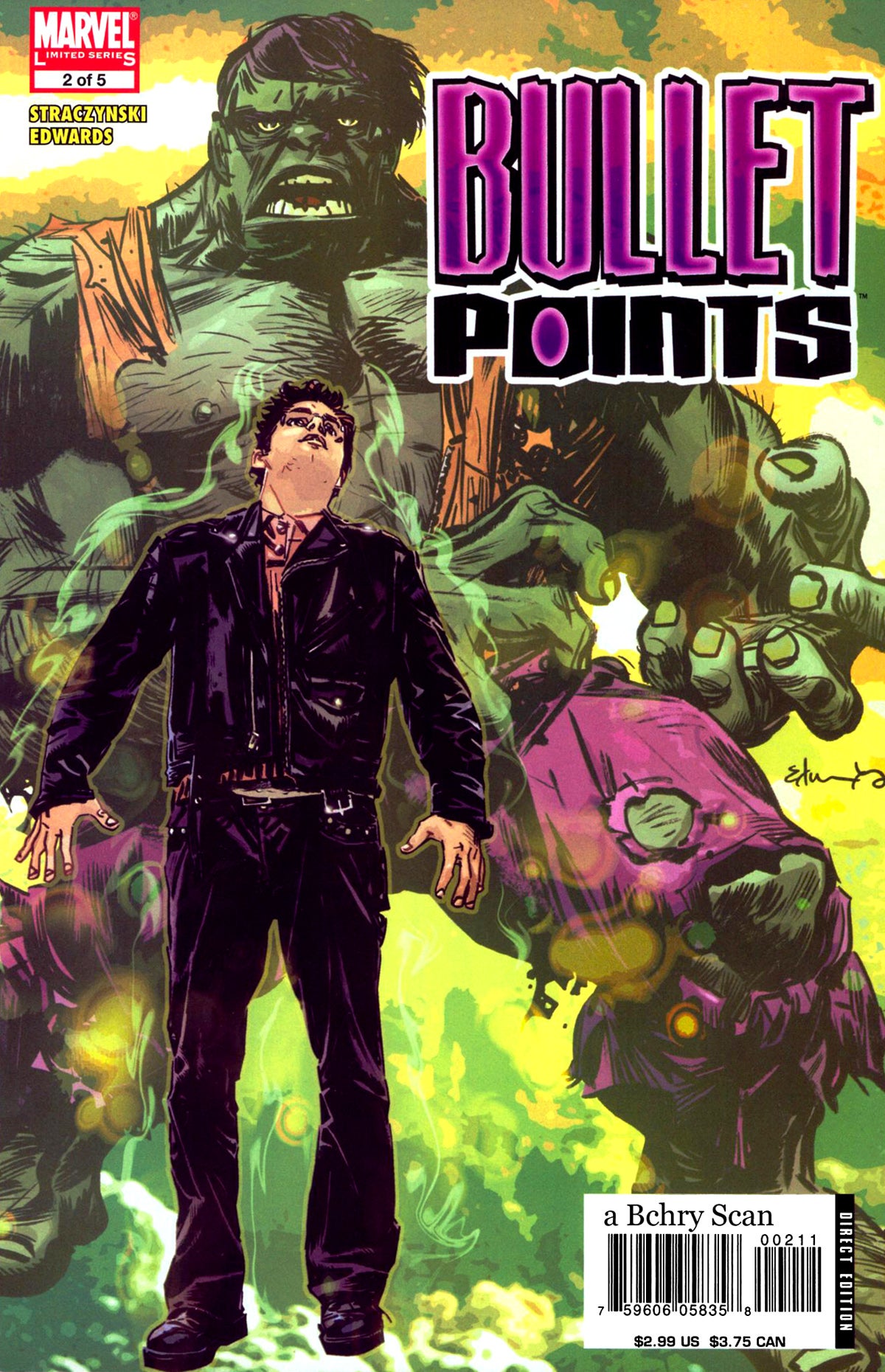 Similar to the general premise of Marvel’s What If? series – which explored how one deviation from a known timeline could impact an entire series of events in unexpected ways – J. Michael Straczynski’s 2007 miniseries, Bullet Points, explores how drastically the Marvel Universe was changed after the assassination of Dr. Abraham Erskine, the doctor who oversaw the Super-Soldier Project: Rebirth (which created Captain America).

While the series takes a look at the entirety the Marvel world, one of the biggest changes that impacts the world of Spider-Man as we know and love it is that Peter Parker is exposed to gamma radiation, transforming him into a Hulk monster, while Dr. Bruce Banner blames himself and after an experiment gone awry on a radioactive spider, becomes Spider-Man. Unlike What If? Bullet Points’s narrative is contextually steeped in a actual world history, which adds a layer of realistic drama and tension to the story. 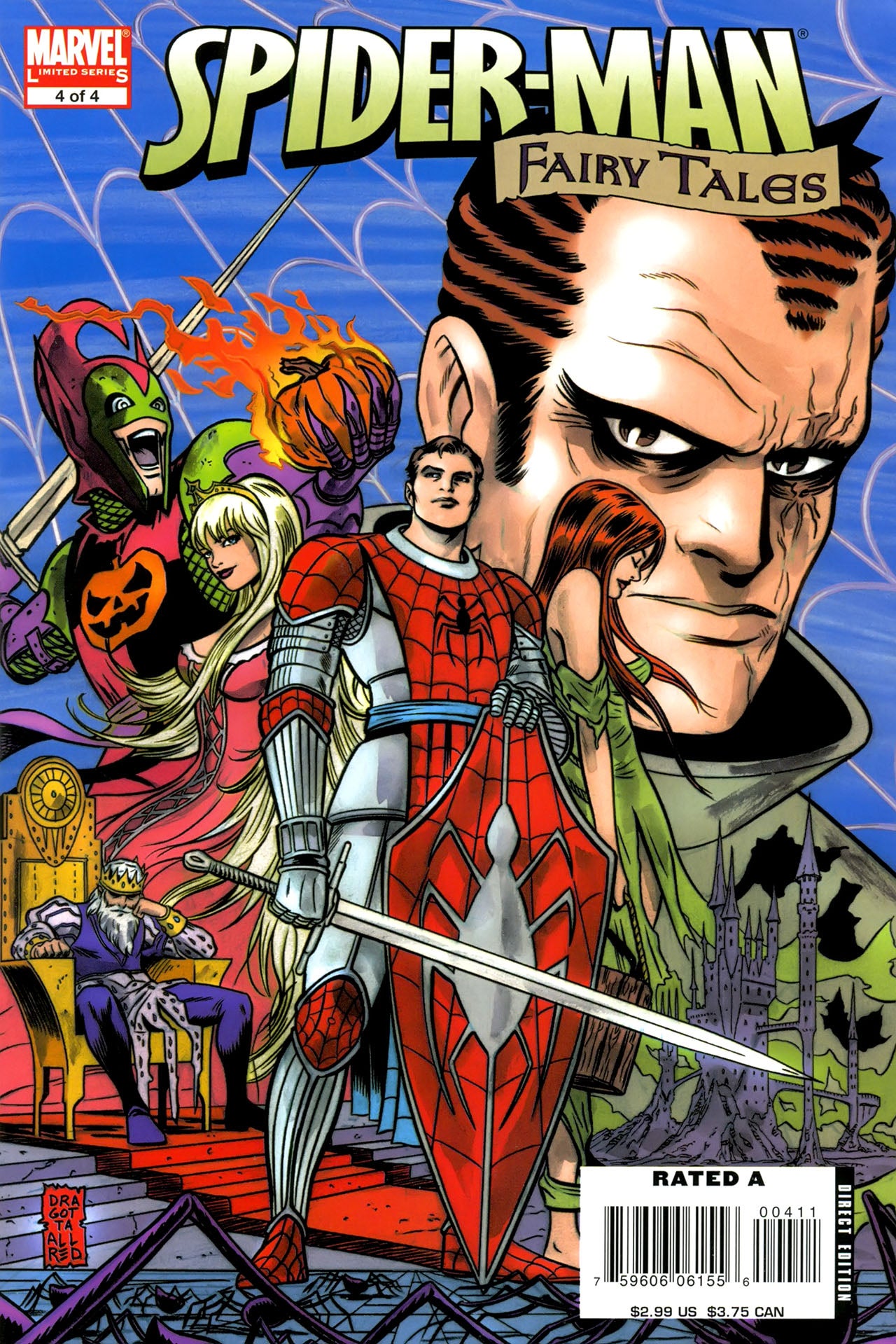 There are a lot of interesting Peter Parker analogues throughout C.B.  Sebulski’s four-part Spider-Man Fairy Tales miniseries, but the fourth and final issue of this series might be the best of the bunch, in large part for its unique depiction of Sir Peter Parker, and the dynamic between Mary Jane and Princess Gwendolyne.

The story is clearly inspired from the iconic “The Night Gwen Stacy Died” storyline from the early 1970s, but takes a fascinating turn by casting Gwen as more of a “prize” to be won, while MJ is the plucky, underappreciated confidant to Peter. Meanwhile, in what other Spider-Man storyline can you find a Peter who is dignified enough to be called “Sir” (without the phrase “I’m going to have to ask you to leave” to follow)? 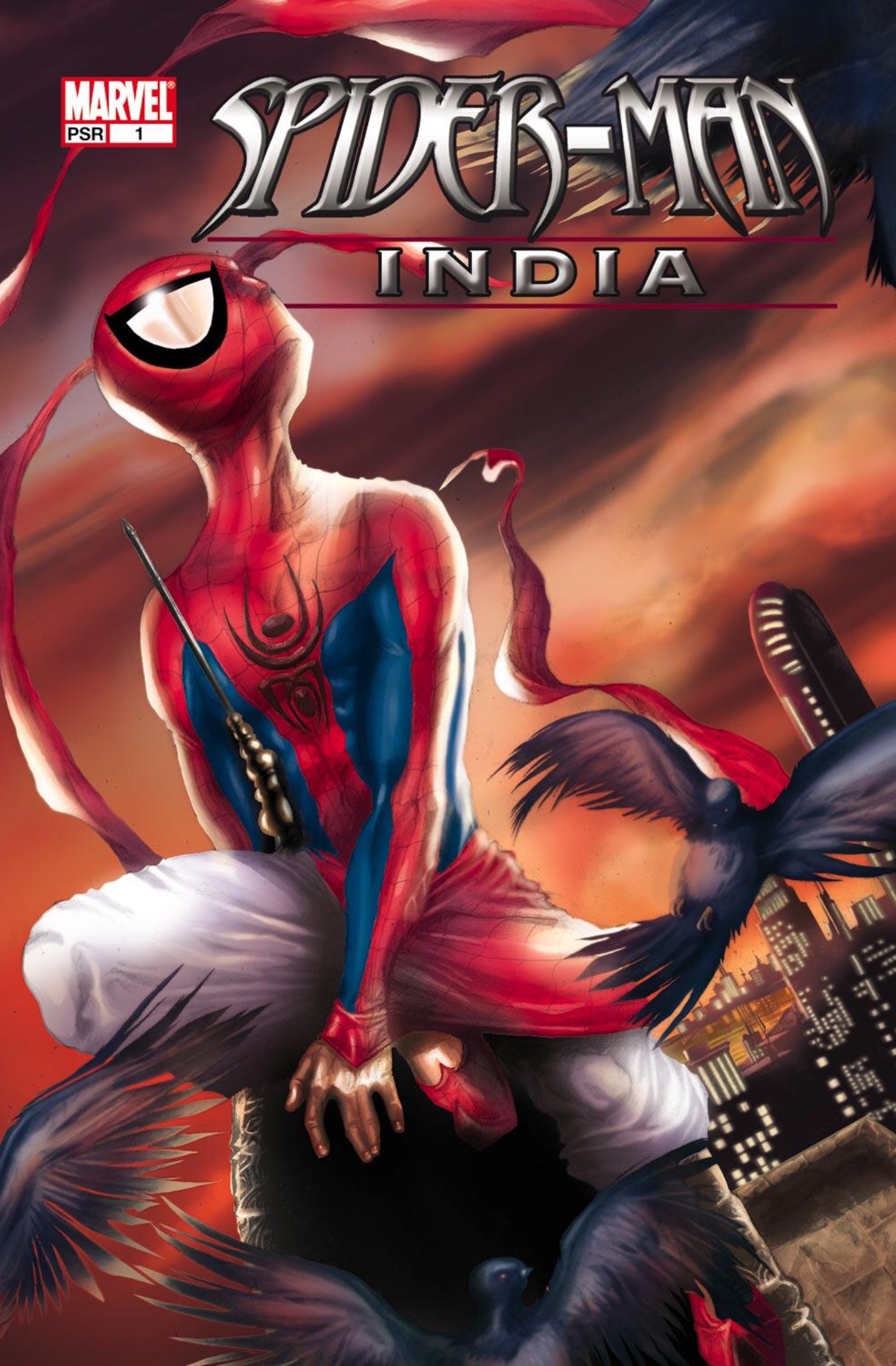 In terms of its narrative, Spider-Man: India shares a lot with the mainstream Spider-Man origin in Amazing Fantasy #15: a socially awkward and bullied teenager is given great power and his decision to not use it responsibly leads to great tragedy for his family. But beyond how similar the story might be, there’s a lot of flair to how Spider-Man: India is told, with a focus on the mystical and magical, rather than the radiation-infused Cold War paranoia that the bulk of the “Marvel Age of Comics” was built upon. This different approach creates some extraordinarily unique character designs for some of Spidey’s famed supporting cast members, especially the book’s monstrous iteration of Doctor Octopus. And Jeevan Kang’s artwork is especially gorgeous throughout the duration of the four issue miniseries. 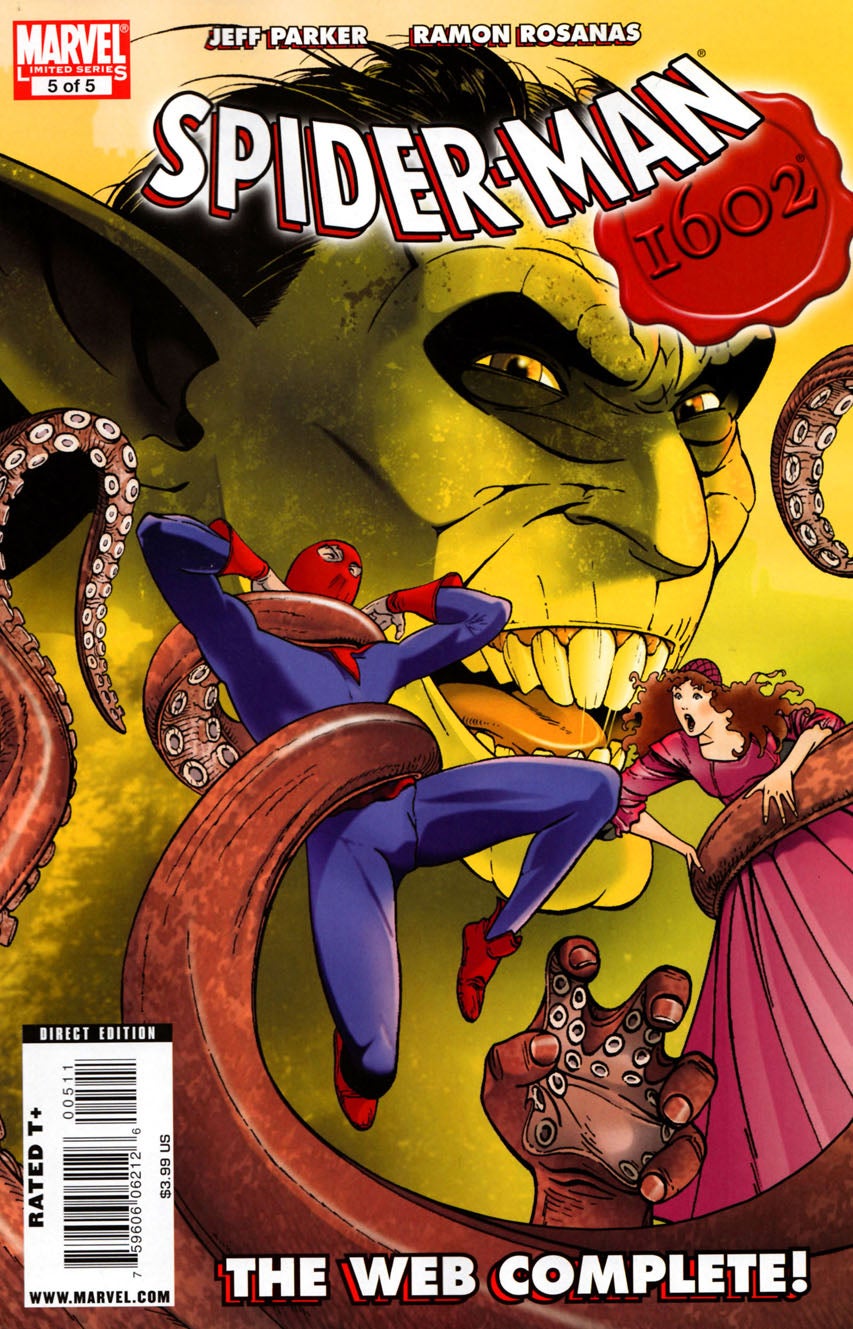 Jeff Parker and Ramon Rosanas script and illustrate this five-part miniseries, which was born from the pages of Neil Gaiman’s 1602 event. In keeping with the 17th century look and feel, Peter Parker has become Peter Parquagh, an apprentice to the royal spymaster, Nicholas Fury.

While some of the delicacy and flowery-ness of the Gaiman story are absent from this spinoff series, Parker and Rosanas do an admirable job building on the 1602 Universe and establishing Peter as a more mature adult. The series also depicts Peter’s budding romance with the Governor’s daughter Virginia Dare.

Unfortunately, fans of the 1602 Peter should not expect the character to show up during “Spider-Verse.” He was the vampiric Morlun’s very first victim in the Free Comic Book Day special released a few months ago. 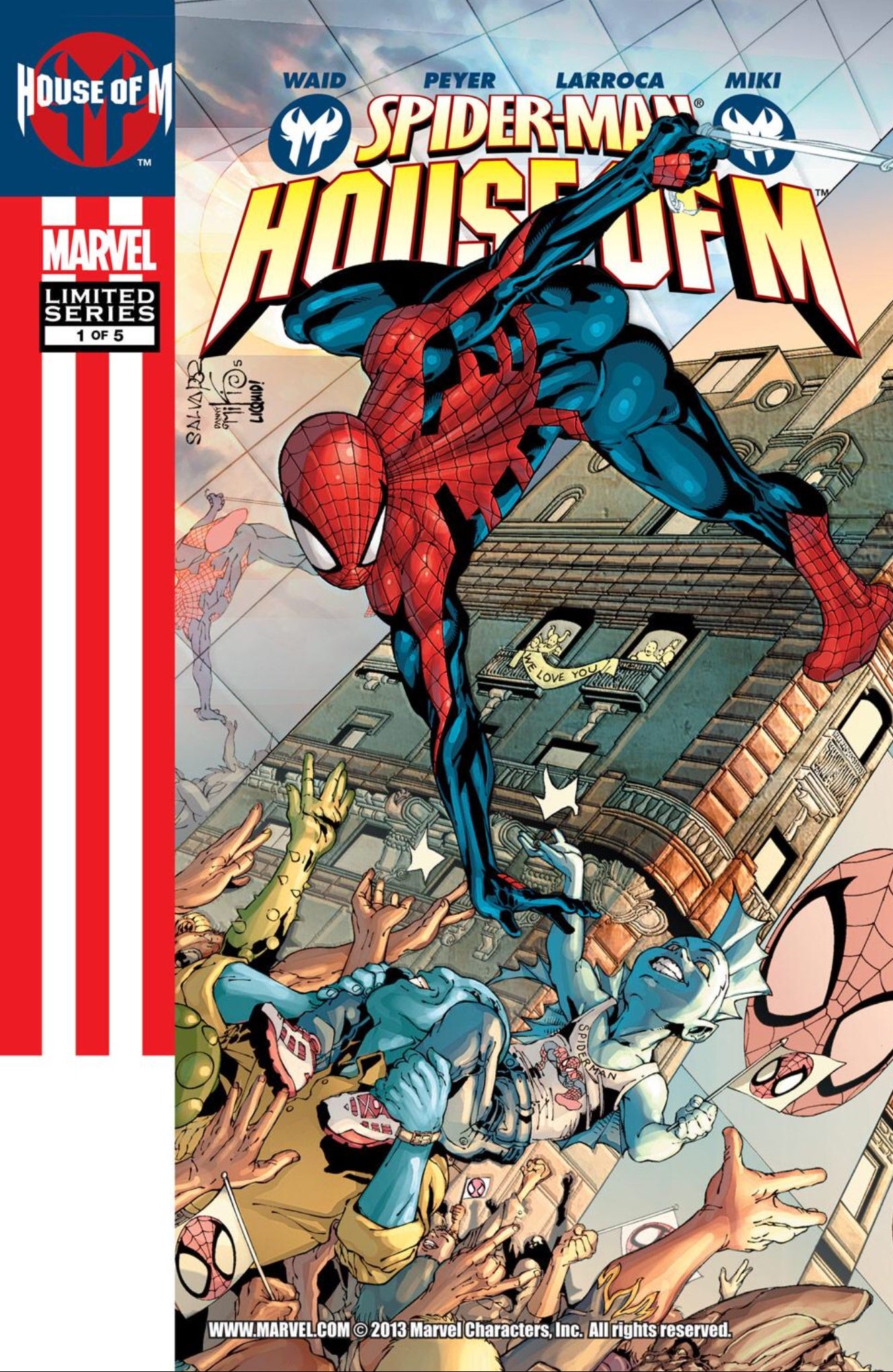 In this miniseries from Mark Waid, Tom Peyer and Salvador Larocca, which was a spinoff from the larger Marvel House of M event, the reader is treated to an alternative timeline where Peter’s secret wishes and desires have come to pass. Here, Peter is a popular celebrity whose Aunt and Uncle are still alive, his long-time adversary J. Jonah Jameson is his personal assistant, and he’s married to the first love of his life, Gwen Stacy.

With so much going right for Peter in this story, it’s hard to figure exactly where the drama fits in, but the creative team does find some worthwhile conflict for our hero. Namely, Peter eventually learns the truth about the warped reality caused by the “House of M,” while his supporting cat also figure out that in “real life” many of them are either dead or factor into Peter’s life in a totally different fashion. 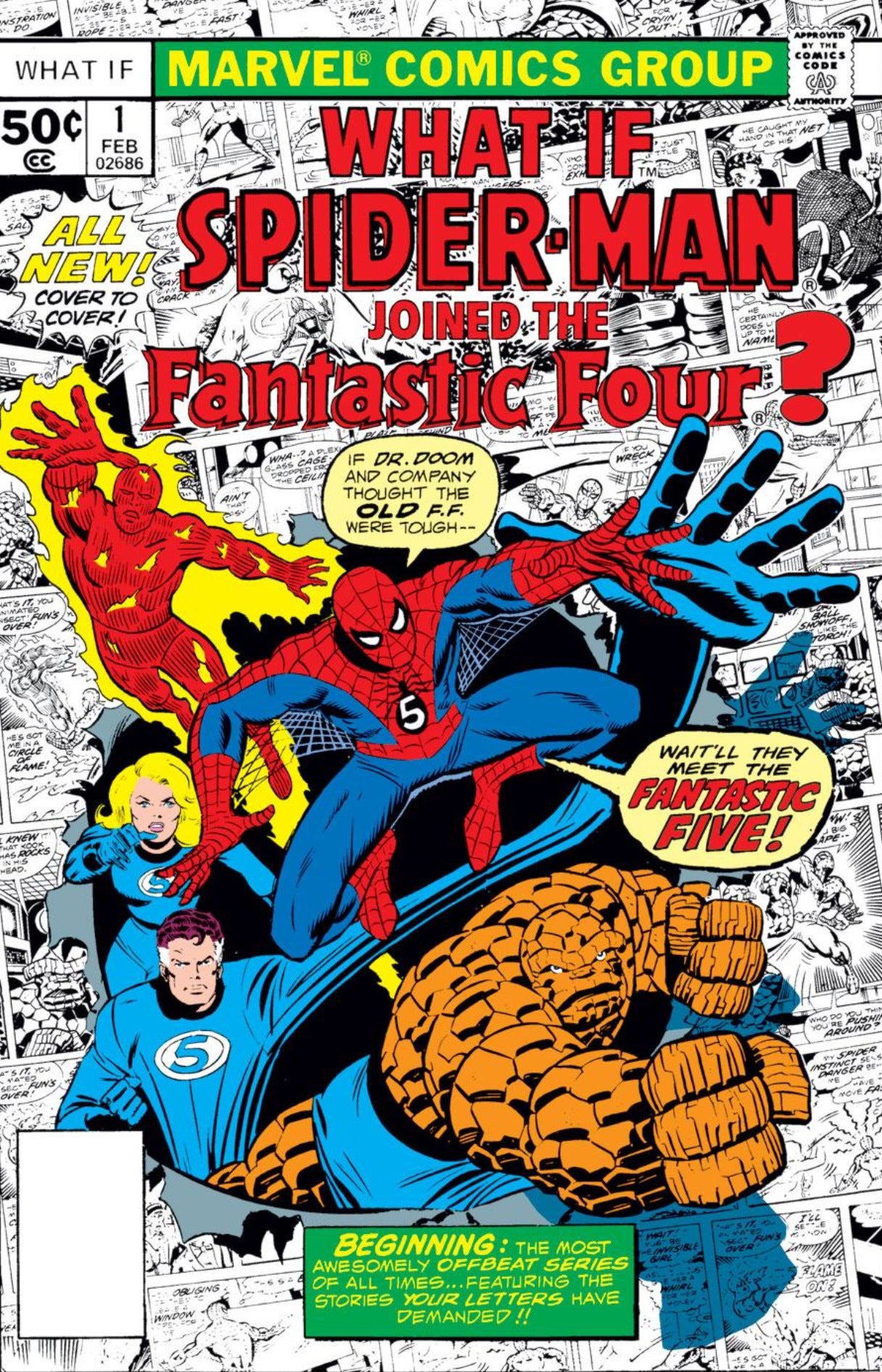 What this issue lacks in compelling story, it more than makes up for in terms of historical significance. That’s taking nothing away from the fun little yarn created by Roy Thomas and Jim Craig, but in the very first issue of What If? series, the two establish a template that gave creators the freedom to destroy the Marvel Universe in significant ways, only to press the reset button at the end of the issue and let somebody else wreak havoc on another character and his cast.

In this instance, Marvel revisits the very first issue of Amazing Spider-Man when Spidey tries asks to join the Fantastic Four. Except this time around, the “First Family of Comics” accepts his pleas. In doing so, an entire new timeline is created. And the consequences are not pretty, especially for those who love the Fantastic Four family dynamic. But that was the whole point of the What If? series. Just one different decision was capable of setting off a chain reaction. 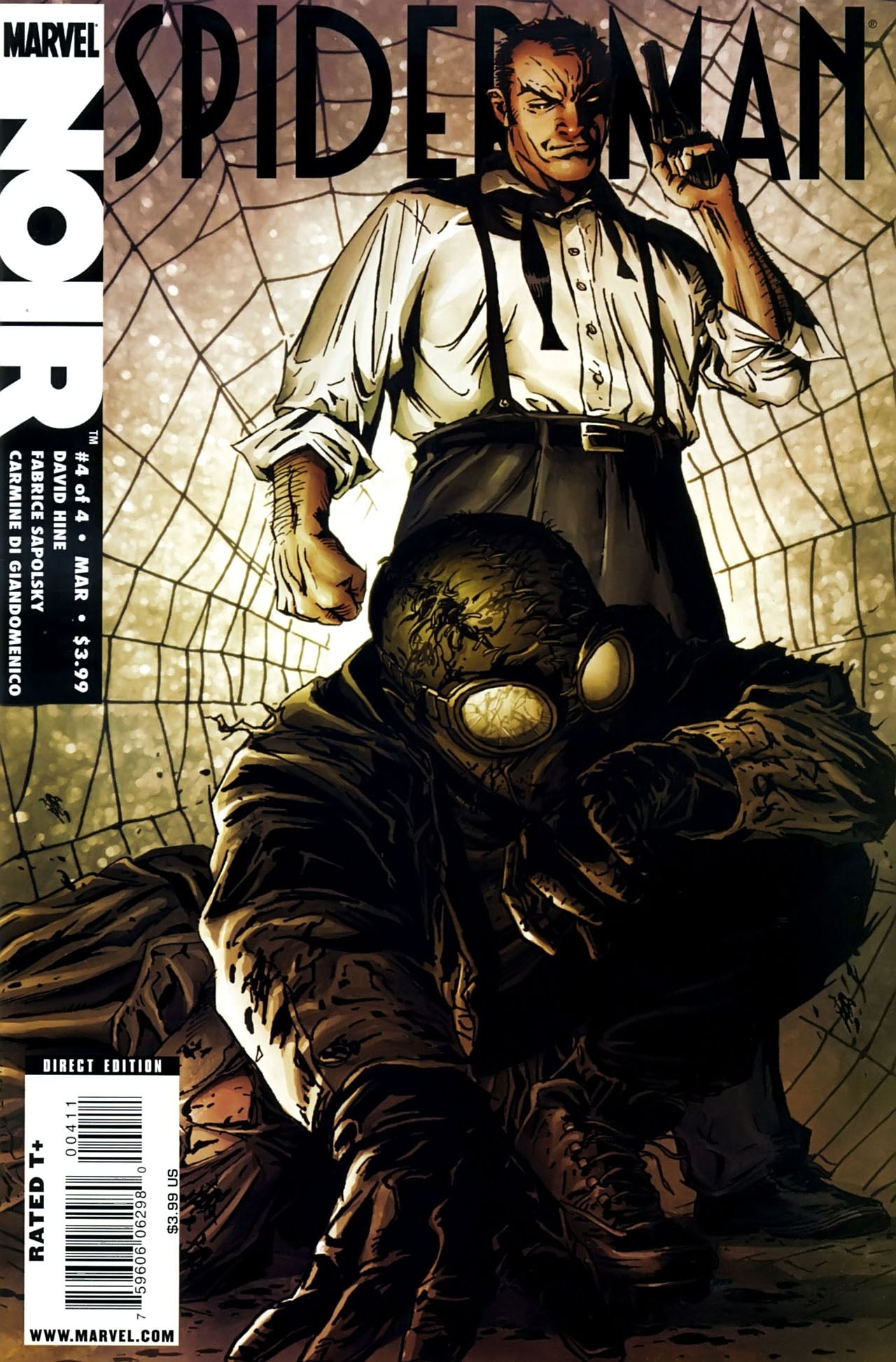 This dark and gritty universe, which was created by David Hine, Fabrice Sapolsky and Carine Di Giadomenico, sets Peter Parker and his supporting cast in the 1930s. As the “noir” in the title indicates, the story is not so much a superhero tale as it is a book about the morally ambiguous and whether or not the ends justify the means. Peter Parker, who’s uncle was murdered in cold blood by Norman Osborn and his entourage of circus freaks, befriends a reporter, Ben Urich, who is not what he seems. Peter still gets his powers in almost mystical/magical fashion, but it’s how he chooses to use these powers in this dank world that sets him apart from his the mainstream iteration nof Spider-Man.

The original Spider-Man Noir was such a success, a sequel was published a few years later and the character was featured in the first part of this year’s Edge of Spider-Verse miniseries. 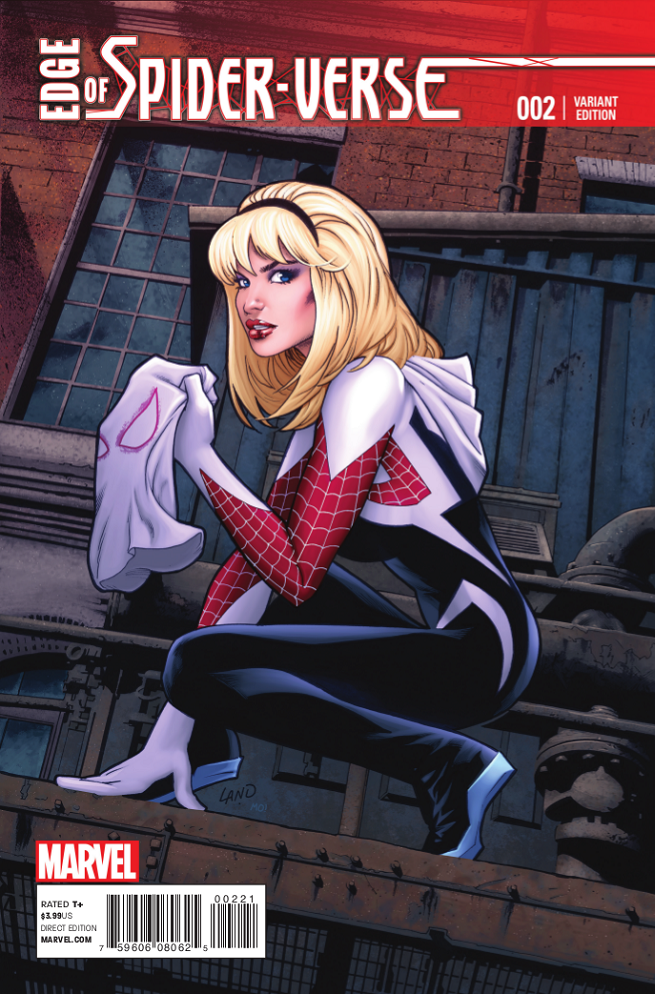 Created only earlier this year by Jason Latour and Robbie Rodriguez for the Edge of Spider-Verse miniseries, Gwen Stacy as Spider-Woman, commonly known as “Spider-Gwen,” has become  a true phenom for Marvel.  In fact, the character was such a smashing success in her one and only appearance, that Marvel has already confirmed that come early next year, she will star in her own ongoing series.

There’s a lot to love about Spider-Gwen. For one, Latour and Rodriquez fill their story with a ton of energy and dynamism, which just makes the character and her world infectious. But the fact that they took this character in Gwen who was so ingloriously killed during the 1970s (in large part because many people found her relationship with Peter to be boring), and to transform her into this super-charged heroine took guts and confidence. Like Peter, Gwen is only coming to terms with her new powers and how to handle them responsibly and has to manage this age of discovery with her police captain father. Spider-Gwen might only be a few months old, but she’s well on her way to establishing herself as one of the most popular female superheroes in Marvel’s library. 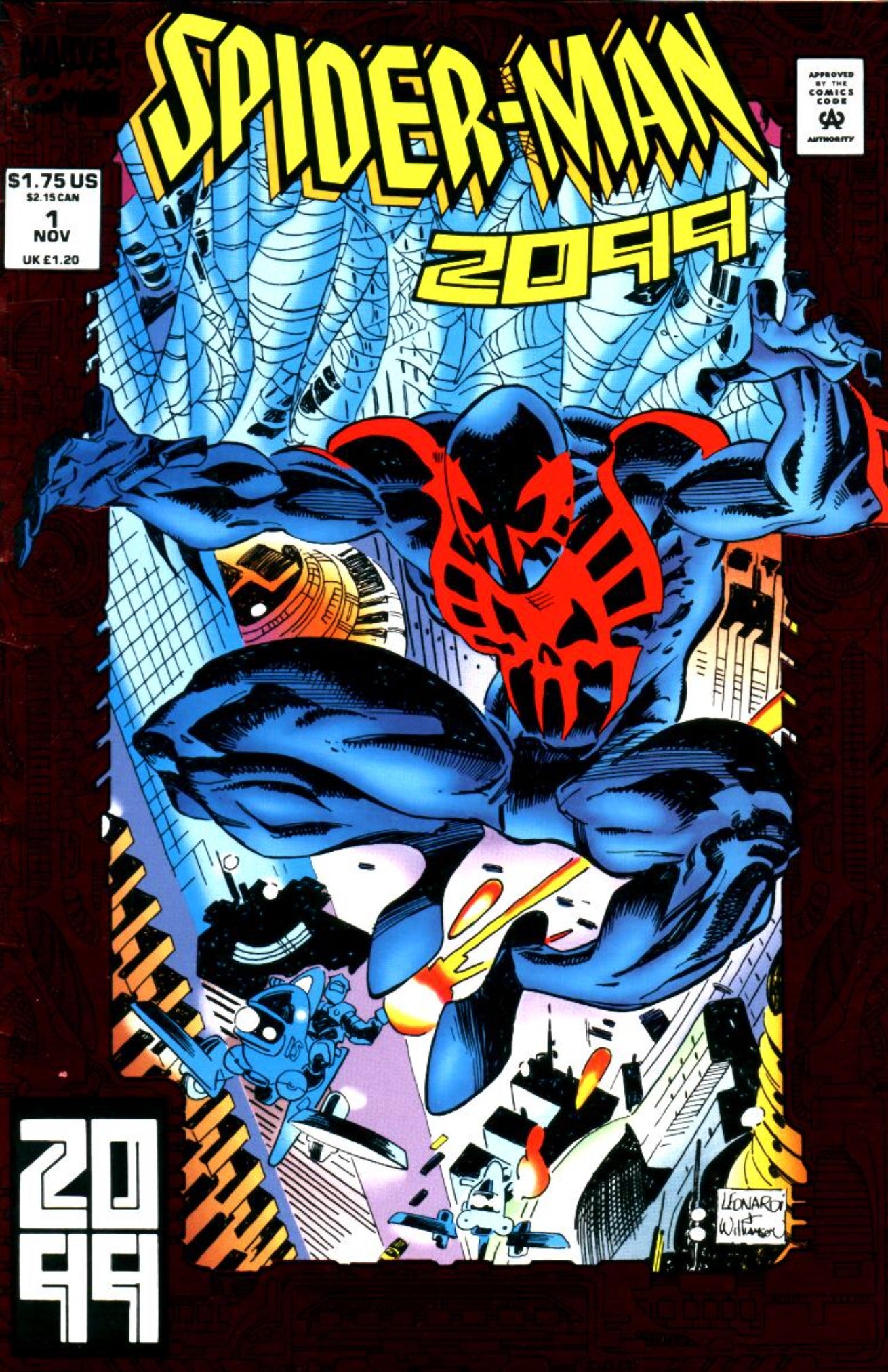 In the early 1990s, Marvel launched its futuristic 2099 universe which took classic characters like Spider-Man, the X-Men and Doctor Doom, and advanced them into the dawn of the 22nd century. By far, the most popular series in the 2099 line was Spider-Man 2099, which was created by all-star writer Peter David and artist Rick Leonardi. In the first three issues of this series, the reader learns the origins of how Miguel O’Hara, an employee at the morally ambiguous corporation Alchemax, had his DNA altered so that he could become the next generation of Spider-Man.

Part of what makes O’Hara’s story so effective is how David’s script finds subtle commonalities between him and Peter Parker, but also distinguishes the character from the predecessor. It’s not just Spider-Man with flying cars. Instead, O’Hara has a harder, colder edge, which feels totally appropriate giving the dystopian future setting. Miguel was reintroduced into the Marvel Universe earlier this year, with David at the helm, and the character hasn’t missed a beat. 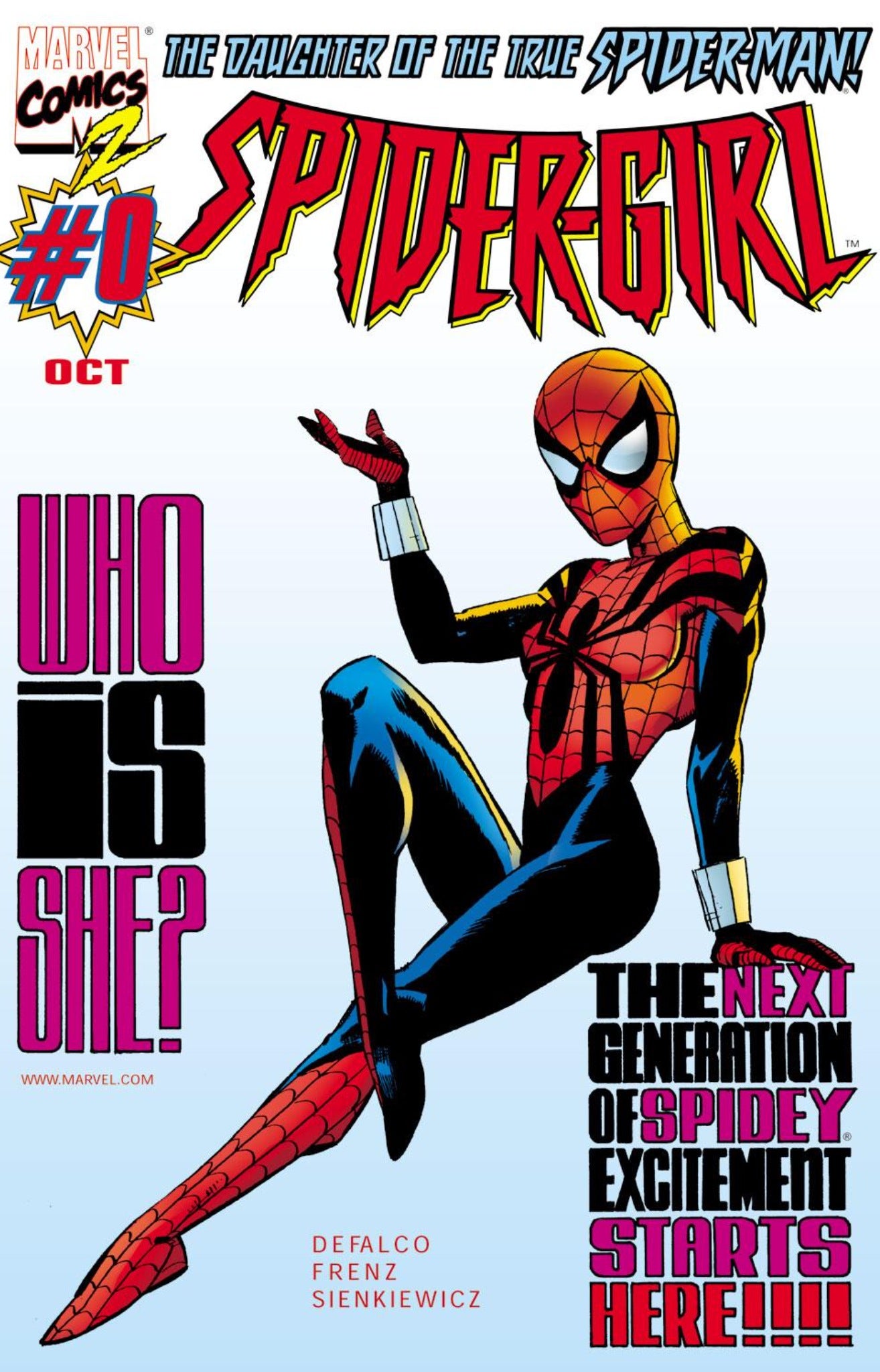 May “Mayday” Parker, the hypothetical daughter of Peter and Mary Jane Parker, was first introduced by long-time Spidey creators Tom DeFalco and Ron Frenz as part of a one-off What If issue. But the character turned out to be an unexpected hit and connected with fans in a way that even Marvel couldn’t have guessed. As such, a brand new Spider-Girl series was launched in the late 90s as the centerpiece for Marvel’s MC2 alternative universe.

The first six issues of the Spider-Girl series, which include the original What If issue (labeled as Spider-Girl #0) depict May’s rise from an average teenage girl into the next generation of superhero. Central to the drama of the book is May’s conflict with her parents, who quickly discover her daughter has super powers, but are opposed to her dressing up and playing hero. The child/parent dynamic helps make May extraordinarily relateable, while readers who love Peter and MJ got to see how things could have gone if Marvel had allowed them to evolve and maturate as married adults. 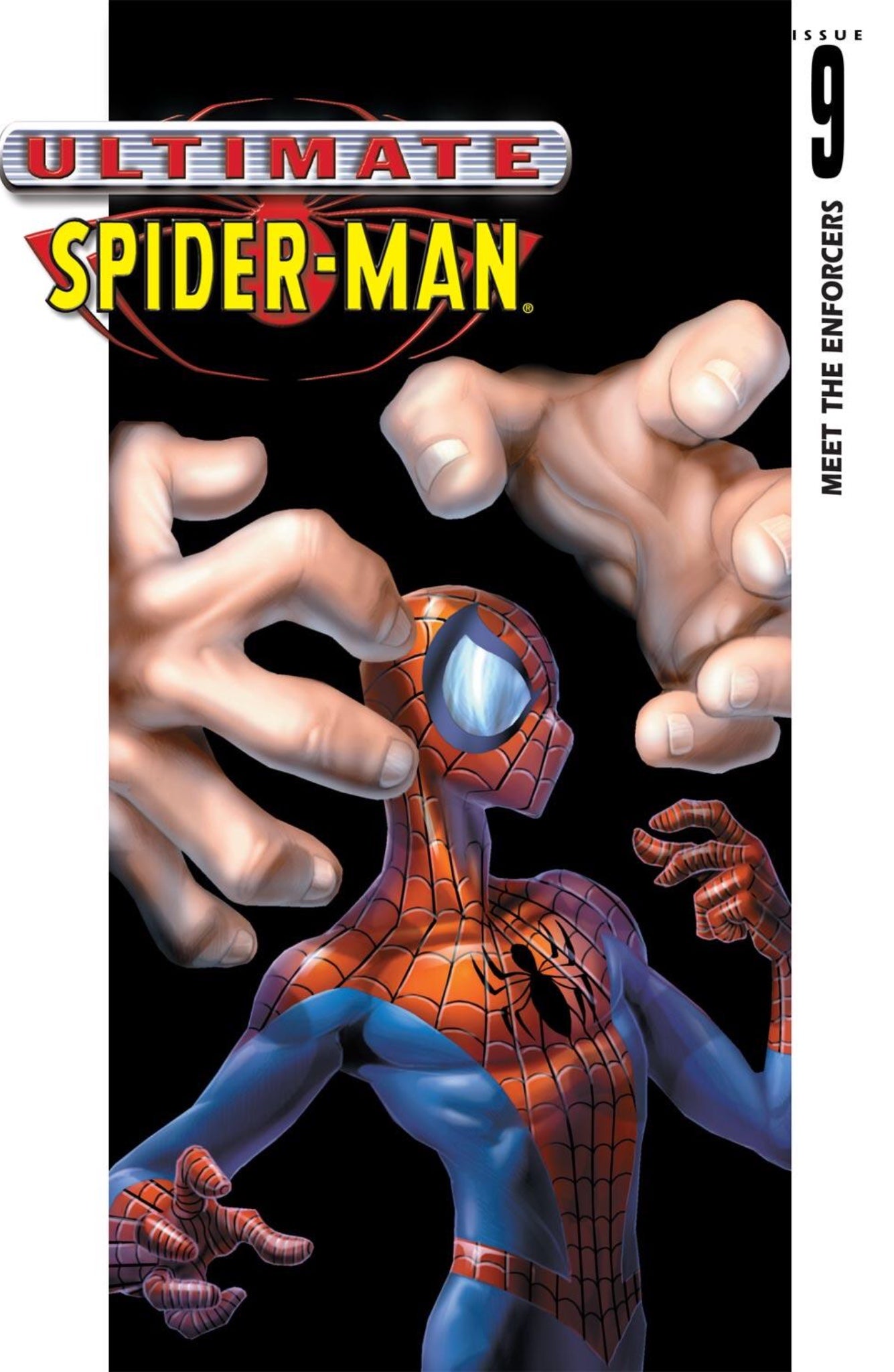 As good as Brian Michael Bendis’s introduction to the Ultimate Universe’s version of Spider-Man/Peter Parker, the comic transcends origin retelling and kicks it into an entirely new gear during its second arc, dubbed “Learning Curve.” Bendis is clearly gaining more comfort re-writing Spider-Man history at this point in time and crafts an excellent Spider-Man/Kingpin showdown that also gives readers one of the funnier bits in Spidey comics history when, mid-fight, he recites a bunch of one-liners in front of the rotund mob boss (and ends up looking like a fly on a windshield for his troubles).

The story also introduces a number of recurring plot points and themes for the series, like Peter’s job working on the Daily Bugle web site, and his ongoing feud with the embarrassing villain Shocker. Then, in an comic that’s a bit disconnected from the “Learning Curve” storyline, but is generally collected with these issues in trade paperbacks, Peter reveals his superhero secret to his girlfriend Mary Jane. The results of this admission is just beautiful storytelling from Bendis and artist Mark Bagley.